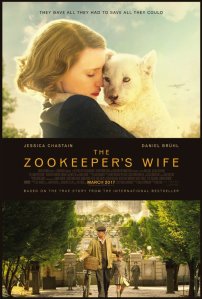 It’s easy to glance at a poster and a title like The Zookeeper’s Wife – originally from the “inspired by a true story” novel from Diane Ackerman – and immediately categorize the picture as fluff. You expect weepy sentiments, cute animals, period piece drama. And while those are all components of the movie, they’re never marginalized or lacking in earned conviction and sincerity. The Zookeeper’s Wife is a tale of profound humanity that’s been left to lurk behind in the shadows of time, and it exemplifies why shining the light on previously unseen chapters in our history can potentially enrich and embolden us to be better, to do better, and to extend our love blindly. 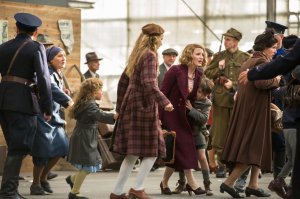 On the cusp of World War II, the happily married Antonina (Jessica Chastain) and Jan Żabiński (Johan Heldenbergh) manage the Warsaw zoo in Poland. He’s a lauded zoologist and she’s an animal whisperer, a woman who has seen evil and clings to the innocence of those in their flock. It’s heaven on earth for them, like an ark that they’ve built and filled with creatures that they care for as if they were their own. Cubs sleep in the same bed as their son. Elephants and hippos are fed apples by hand. Then bombs land, the Germans invade, and their little piece of paradise is turned into hell. Rather than run for the hills, the Żabiński’s stand and defend their home, and in the process of doing so, risk life and limb to do what is objectively right. I personally don’t believe in the veracity of presumed miracles granting sainthood, but if there ever was a secular and documented case worthy of such consideration, the couple leading The Zookeeper’s Wife are more than deserving. 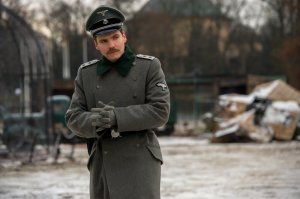 The overwhelming empathy exuded by Antonina and Jan defies any sort of sanctimony; these are two fully-realized people who know how to be loved and are always more than capable of reciprocating those feelings tenfold over to strangers. Standing in their way is Lutz Heck (Daniel Brühl), Hitler’s chief zoologist and a tremendously written bad guy to challenge our protagonists. Lutz barges into their home at his own convenience, believes he’s smarter than Jan, and makes forceful advances on Antonina. He is tied to the vile Nazi movement but also has a likability to him due to the fact that, despite his maliciousness, he shares an affinity for animals. In the hands of the ridiculously talented Brühl, Lutz becomes everything a villain should be: sympathetic, weak, but not damaged beyond repair. 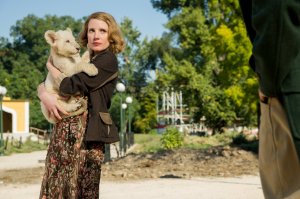 Niki Caro’s film has its fair share of blemishes: it’s a bit overlong, tends to jump to major conclusions without evidence, and occasionally overdresses its inhumane circumstances so much so that the sting is more that of a pin prick than a dagger. Regardless, The Zookeeper’s Wife is intimate and invested, like a school teacher waiting for solace and silence before dispensing a worthwhile statement to their students. The picture flourishes when the commotion settles. In its best and most emotionally driven scene, Jessica Chastain – maybe the best actress of her generation – exercises her calm nature on a young stowaway named Urszula (Shira Hass, an undeniable talent) after she’s been visibly raped and beaten. Urszula trembles in the corner, still shaken and weary of contact or comfort. Antonina sits beside her, cradling a rabbit, recalling her past and saying, “Maybe that’s why I love animals so much…you look in their eyes and know exactly what’s in their hearts.” In that moment, Chastain evokes the kind of personal connection I’ve only ever witnessed in a retirement home when service dogs came to visit the elders, allowing them to feel needed and nurturing. The Zookeeper’s Wife is a necessary film for the now. One about a worthwhile life that exists outside the borders of hate or intolerance. It might be imperfect, but I will forever defend a movie that justifies the purpose and the righteous quest for goodness and requited loved.

“My heart is no different than yours.”