“Don’t spoil it now by speaking.”

If you were to huff and puff away at the hallucinogenic pipe of Lewis Carroll’s Alice in Wonderland and ash the embers inside the awkward teenage realm of a John Hughes film – most notably Sixteen Candles – you’d end up with the cunning and endlessly ambitious Girl Asleep. Categorizing this movie is to deplete the source of its bloody good charm, and so you have to just sit back and dissolve into a story told through the most unorthodox of methods. I’ve seen plenty of the films which this picture draws inspiration from, but not once have I come across a potluck that brings them all to such a rich, flavorful stock without boiling over. Not many people will see this movie, which is a shame, because in the near future I believe it’ll stand as a building block for cemented stars who once were only celebs in the making. Keep an eye out for everyone involved. 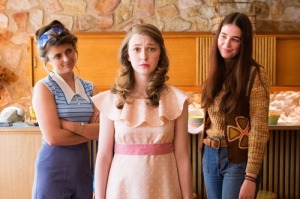 Greta Driscoll (Bethany Whitmore) is the new girl who isn’t too cool for school. She’s plain yet pretty, outspoken while normally emotionally reserved. The presumed class nerd Elliott (Harrison Feldman) embraces Greta’s naiveté while she accepts his unbearable eccentricity. They’re like two unacquainted pets; Elliott sniffs around hyperactively and Greta uncomfortably recedes to the corner of the room. Where Elliott oversteps his bounds in an immediate clinginess, his tendencies are obviously harmless and worthy of the friend zone, especially when compared to the groovy girls who take a liking to Greta. In Girl Asleep, people are as much a product of their own insecurities as they are the material through which their blanket of inequity is sown. The characters affect one another, not always for the best or the worst, but in the natural state of symbiosis. Cause and effect relationships can even exist in lavishly flamboyant realities such as this one.

As a young adult, Greta’s basic problems are magnified and envisioned as life or death circumstances in her still formative mind. Dad’s (Matthew Whittet) embarrassingly awkward. Mom (Amber McMahon) ignores Greta’s waving white flag, always pushing her daughter to try something new. Genevieve (Imogen Archer) skates by as the older and more sexually experienced sister, a woman who’s no longer a little girl. These qualities are quite purposeful come the film’s leap of faith in a move that depends upon us pigeonholing these outside personas and their influences in and around Greta. She’s at her 15th birthday party that she didn’t ask for, a 70’s set Australian Quinceañera of sorts, accompanied by spontaneous dance numbers and an irreverence, or perhaps an aversion, to logical detail (mind you, the party happens on February 31st). This film takes place in its own little oxygenated plastic bubble, shaken like a snow globe, looking at the outside world from inside a box. And you know why that works? Because it puts us into the ceaseless creativity of Greta’s relentless imagination.

Girl Asleep does not shy away from rapping away at the door of metaphorical storytelling. Instead it peers right through the peephole, unflinching, confident, comfortable in its own skin. It’s a complete contrast to Greta herself, a young woman direly afraid of abandoning her youth. The film’s major twist comes when her music box is stolen, and off into the wood goes our little red-haired riding hood, encountering those close to her through a Brothers Grimm labeling system; these side characters are narrow so that they can collectively build up our lead. Bethany Whitmore proves this task unnecessary though, as she gives the kind of revelatory performance that can make a young actor’s career should the right people see it. I hope that they do, and that the same attention is brought upon director Rosemary Myers. Girl Asleep sets sail as a simple drama and then finds a home in a pinball machine, always pinging and ringing and bouncing around, undefinable but constantly exciting and engaging. Do not sleep on this film. Someday you’ll be scrolling through IMDB and remembering that “so-and-so” was a part of this immaculate and personal whirlwind. See it now and praise its unpredictability and skillfulness, if only so you can one day clap back with an assured, “I told you so.”