“Wondering if you’re happy…it’s just a great shortcut to being depressed.”

In the brilliant, timeless, and transcendent 20th Century Women, there is a feminist awakening found in the borrowed pages – turned again and again with a licked finger and anticipation – of the book Our Bodies, Ourselves. I read this years ago, many thanks to my liberal arts degree. At the time my twenty-something self took the course in hopes of meeting women. I failed quite miserably. Years later, I realize the joke was on me; every lady knew my false intentions and I was too stupid to mask them. Women do always tend to have the upper hand. But looking back on the book and digging into it for applicable quotes, I couldn’t help but concentrate on one definitive phrase. “Alienation is also what makes it hard for us to talk about sex.” 20th Century Women is an empowering film because it dares to investigate the human experience, full of virtue and disdain, solace and servitude to thy neighbor and to thy self. This is storytelling of the most observed and didactic nature. Diamonds in the rough rarely shine so bright. 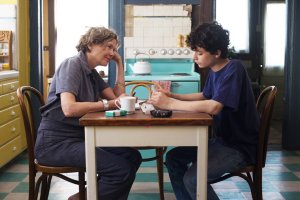 As Roger Neill’s scattered original synthetic score slips and slides through the speakers, the camera glides above the cascading waves of a 1979 Santa Barbara coastline. Neill’s brilliant and deftly devouring touch on the keyboard lifts our souls, helping to further elevate a cast full of characters who embody a passing sense of totality. Rich in spirit, deperate for love, a messy makeup of ruin and responsibility. These people are relative correspondents in their own epistemic pursuits of truth, like dependent castaways, entirely unique in their decisions of when/where/how to live a life that’s of their own choosing. The story doesn’t depend upon us fostering a fire; it simply wants us to sit close and to be warmed. To watch the kindling crack, to stoke the flames, and to extinguish the fire come closing time. Leaving this movie is like saying goodbye to a late night summer bonfire surrounded by good people; you wish that moment was as evergreen as the deep woods. Likewise, 20th Century Women captures such a mood, and makes you long to live in it. 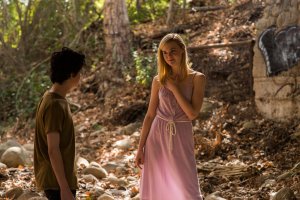 So what allows Mike Mills’ film to be as revealing as it is? In a way, I’d say it’s because 20th Century Women veers away from becoming a love letter to relationships and resembles a personal game of telephone. And that’s what makes the film such a confusing and compounding success. This is the story of inadequate equals. 15-year-old Jamie (Lucas Jade Zumann) has his eyes set on Julie (Elle Fanning), the older friend who sneekily sleeps over to talk and not to fool around. Abbie (Greta Gerwig) is a tenant in the run down manor, a full-on feminist blaring records of the soon to be deserted punk rock scene. Handyman William (Billy Crudup) also lives in the abode. He’s a perceptive and nomadic man. Attractive, good with his mitts, unsure of himself and his wants. But the matriarch of this rickshaw castle happens to be Jamie’s mother Dorothea (Annette Bening). She smokes like a chimney, invites strangers over for family style dinner, and resembles a Bohemian with more sensibility and structure. They can all collectively be careless at times, but never are they care-free.

Some nights are spent at music clubs, days by skateboard half-pipes, others at work or in a doctor’s office. The characters always return to their nucleus of a home though. It’s appropriate for these minds to walk the halls of a beat up old house undergoing restoration. As the railings are sanded and the walls painted, so too are they trying to fix themselves. 20th Century Women has a faint plot; Dorothea, separated from her ex and unwilling to be on the open market, asks Abbie and Julie to help raise Jamie into a man. She doesn’t put the onus upon Max because, while capable of sculpting pottery, he’s oblivious to his own real nature as a man. Like I said before, Max is confused. And it’s with this decision that 20th Century Women reveals its worldview to be the supposition that women are teachers and men are students. But isn’t that true? Men are like Perennials, always in bloom, open and prideful and penetrating. On the other hand, women seem to thoughtfully, carefully, and consciously choose the path of Annuals. Isn’t it wonderful, how we can be so similar and so different at the same time? Mills understands the unpaved path towards self-confidence and actualization, and how it differs between the sexes while being an ingredient to the web of humanity. Connectivity is key. 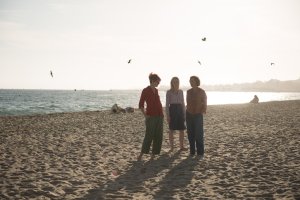 20th Century Women is, bar none, the most complete ensemble of the year. Zumann delivers the bravado of a young man. Fanning – an actress I’ve been critical of in the past – completely dissolves into her character. I’m realizing that she’s an actress entirely dependent upon great direction, which she gets from Mills. Mr. Crudup continues to be one of my longstanding favorites. Gerwig deserved more awards attention. But most of all, we have Annette Bening, a formidable and fierce actress who should’ve been up for an Oscar. Her career has been long and lauded, and I’m still not sure I’ve ever seen her be better. 20th Century Women tightly packs its powerful performances, handled with care, shipped with a “Fragile” stamp yet experiencing bumps and bruises along the way. That is Mike Mills’ genius work as a director, and a paramount testament to his skill as a writer. First he introduces us to this world. Then to the people. Then they’re inspected through a biographical lens; a co-authorship with the ones who raise us. And eventually by the conclusion, the film becomes autobiographical, the characters no longer described by their peers but once and for all telling their own respective journeys. It’s about how people see us, how we see them, and how having open eyes is the first step to engaging a compassionate heart and an empathetic intellect. This one makes you think, love, share, and stay up until the witching hour hoping to find solace among the stars. 20th Century Women might be little, but oh how its vivacious power twinkles and never fades away. I loved this film, mostly because it deserves to be loved and embraced.

“Life is very big, and unknown.”