“It’s not enough to break the rules. You have to be strong enough to make your own.”

Ben Affleck’s a good director. His first film Gone Baby Gone is about as strong a debut as a filmmaker could hope for. The Town, his sophomore followup, has the grit and grime and grace of a veteran storyteller. 2012’s Oscar-winning picture Argo, vastly overrated but entertaining nonetheless, showed an ability to direct a fast film with countless moving parts. And now he’s made Live by Night, a dour and drab attempt to tell a lifelong criminal odyssey. What’s meant to be suspenseful becomes as plain as off-brand vanilla, over-churned and freezer burnt, striving for the best components of a masterpiece like Goodfellas while stretching out as episodically as a bad season of Boardwalk Empire. We all immediately understood Henry Hill’s intentions when he said, “As far back as I can remember, I wanted to be a gangster.” Live by Night fails to meet this high mark, but what’s worse is that it thinks itself to be so close when it’s actually so far.

The fourth novel from author Dennis Lehane to make its way to the big screen, Live by Night is by far the most futile and fruitless of the bunch. Simply put: too much happens, and as a consequence, happens without much reasoning at all. It’s the 1920’s and small time crook Joe Coughlin (Ben Affleck), the black sheep son of a local lawman (Brendan Gleeson), hits banks with his crew. He’s in love with Emma Gould (Sienna Miller), the side piece mistress to Irish mafia head Albert White (Robert Glenister). Joe doesn’t want to be a gangster because he’s more inclined to independent contracting in the business of theft. Italian mafia boss Maso Pescatore (Remo Girone) has others plans for Joe though, blackmailing him into signing his future away on the dotted line of career criminal. 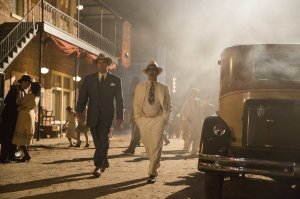 Joe heads to Tampa with a mission from Maso; expand the empire. And so he does. He negotiates deals to traffic rum for those dying of Prohibition Era thirst, falls for one of his business partners named Graciela Corales (Zoe Saldana), and enlists the help of his old friend Dion Bortolo (Chris Messina) to muscle out competition. Their lives are drunken in revelry and prosperity. But there are double crosses, the end of Prohibition, violence spurred by a thriving KKK, plus a young preacher (Elle Fanning) sharing God’s good word against the vices of booze – and unfortunately for Joe’s hopes of a casino – the illicit nature of gambling. And to think that there’s even more to the story than this. Live by Night wants to thrive or die by the strict moral code of Joe; the man’s virtuous in that he has the ability to deceive but to never outright lie. There’s something to be found there, yet instead of telling a succinct story through a singular lens, Live by Night mistakenly aims for a worldview as grandiose as a glimpse through the Hubble Space Telescope. It’s too much for two hours. 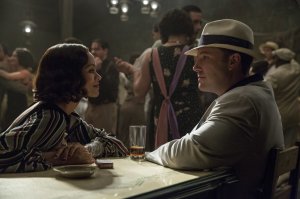 Affleck’s direction is fine for what it is, although the editing tends to disassemble quick fire footage already lacking a fully cognizant eye for time or place. The sets are uninspired and the gangster era costuming, appearing to be drapery sized hand-me-downs from an early 30’s James Cagney picture, look about as genuine as artificial leather.  If you’re going to see this movie on the big screen, make sure to fully appreciate its lone redeeming factor, which is the zealous nature of legendary cinematographer Robert Richardon’s palette. He’s considered one of the best for a reason. Other than that, Live by Night becomes another example of Affleck’s somewhat surprising ability to direct a film so fluidly and to guide members of his cast to winning performances, save for himself in this case, as well as for the disastrous Elle Fanning (who I’m now convinced is as horrible, fake, and unemotive an actress as I’ve seen.) Live by Night rattles off plotlines at the clip of a Tommy Gun, never looking down the eyesight to make sure anything actually hits. I’m sure it’s fun to blindly spray bullets. I’d argue there’s more satisfaction to be found in taking the time to aim and hit a bullseye.

“I’m afraid you don’t understand how things are done here.”