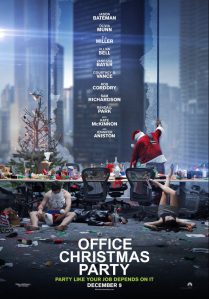 “Can this thing handle snow?”

In storytelling, a hamartia is a fatal flaw exemplified by a single character. This is typically greed, jealousy, disdain. It’s a telling reflection of a person’s own sense of inequity unfairly imposed onto others. The issue with Office Christmas Party isn’t that it goes through this natural self-healing process; we all have flaws and displace them. But the problem at hand is that the film allows every cubicle and corner office dweller to grab the mic and voice their negativity center stage, the bright spotlight shining on a marred darkness. Great R-rated comedies know how to blend this sort of mean streak with friendly sentimentality. Office Christmas Party definitely tries, but falls far below average.

The formula behind this film is as thick and distasteful as a Robitussin knockoff. Sweet with an unexpected back of the throat bitterness. Like a tablespoon of that cough suppressant, Office Christmas Party briefly pinches your nerves and shoots your consciousness awake before walking you towards a tiny tiger snooze. That’s because the movie has been poorly directed by the team of Will Speck and Josh Gordon. They’re both working off of a shallow script, but it’s still written with the correct beats and enough necessary call backs to make this borderline amusing material. And still, the cast interactions are lost to free-wheeling word play, allowing demonstrative comedians to act outside of a governing power. These directors, with more assertion, could have made a stronger film. I don’t think they could have managed a worse one. 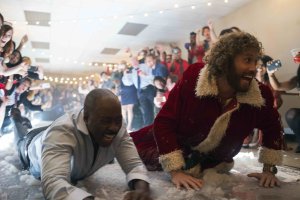 We’re hunkered in for a cold Chicago Christmas. This is one of Zenotek’s handful of firms, specializing in developing software servers. The office is run by Clay Vanstone (T.J. Miller), given to him after his father’s passing. His serious and at times sinister sister Carol (Jennifer Aniston) became CEO of the company, hellbent on closing branches which don’t meet her inflated statistical analysis. Clay desperately needs a new account, and after a failed sales pitch to Walter Davis (Courtney B. Vance), makes a last ditch effort by inviting him to their non-denominational office party, previously forbidden by Carol but overridden by the hard-partying Clay. The scale of the film is supposed to be intimate in its chaos and looses us by branching outside to the entire Windy City. And yet, this is a component of the film’s best scene, depicting a ride with a new Uber driver that’s a delicious recipe for disaster. That hysterical backseat jaunt – and much of the picture – feels inspired by Planes, Trains, & Automobile’s heartbreaking “Chatty Cathy” scene. But outside of that hilarious fault line, the film grows too broadly ribald in its humor to equalize its false sense of sincerity.

Nothing about Office Christmas Party feels outright owned. This film lives on a lease, primarily from the personalities of the American iteration of the television series The Office. Clay’s a weird, childish leader. Josh (Jason Bateman), recently divorced, manages the office and can’t act on his crush for Tracy (Olivia Munn). She’s smarter and more time resistant than he. Mary (Kate McKinnon) is the hated head of HR, always the downer of the party. Even more characters align. Sound familiar? While I did not like this film, and I still maintain my opinion that McKinnon is a poor screen actress, she uses her Hillary Clinton impersonation here to great effect. In such a stupid and brash comedy, her cunning feels smart, even timely. That said, these main characters go on and on and on while the side roles just add more and more faces for us to floss in between all of the little snaggletooth projections and gaps. Office Christmas Party presents itself as a wild and boundless zoo, but ultimately is a tame and self-contained menagerie of the mundane.

“Shoot for the moon and you’ll land on the sun.”