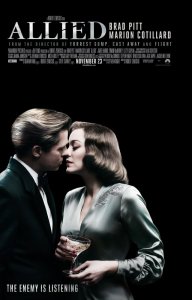 “Are you just saying this to say something, or is it real?”

Spy thrillers, by their very nature, are hard to love because they’re so riddled with deceit. How can we trust a story that so badly wants to emotionally manipulate us? They are, however, movies that can be easily enjoyed, and in the case of Allied, entertaining in its classical telling while also being incomplete and flawed. These seeds of doubt have been planted with a no-nonsense level of skill, as automatically sown as an assembly line solely employing machines. Allied has a sensual intrigue to it, yet is still sorely missing a deeper understanding of humanism in its chemical equation. We see what transpires, and it occasionally hits hard, even surprisingly so at times. But even when I pitied these people, I could only reciprocate its sympathy with equal amounts of compassion and disdain. 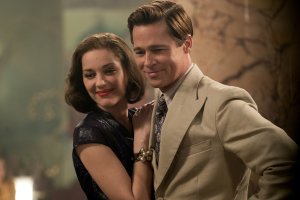 It’s understandably difficult for audiences to not be sucked in when watching a film featuring two great looking faces. Strong chins, sharp jawlines, open eyes, pristine and Anglican. Beauty is skin deep though, as evidenced while we dive into these people when we don’t know all of their inner trappings, some doors locked, others hidden. It’s 1942 and Max Vatan (Brad Pitt) parachutes into the French Moroccan dessert, cabbied to Casablanca to meet his accomplice Marianne Beausejour (Marion Cotillard), a French resistance fighter who’s built a local life to gain the trust of Germans so the two can take out one of Hitler’s prominent ambassadors (Anton Blake). They succeed, Max asks for her hand in marriage, and back to London they go to make a life together. Eventually learning that his wife and the mother of his daughter might be a secret agent spy leaves Max in a tailspin. 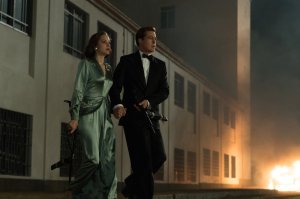 Allied doesn’t have much of an outlined plot to start, nor does it enrich its story with hints dropped here or red herring devices hatched and then laid elsewhere. All of that changes when the marital drama and suspicion are acted upon though. Screenwriter Steven Knight flips his script from a paling Casablanca impersonation to the likes of Hitchcock’s 1946 film Notorious, maybe even a little derivative of The 39 Steps as well. I found Allied to be at its most interesting when it tried to do very little, engaging us in drawn out silences, bringing about questions of devotion and secrecy and truth. The set pieces work, but they feel almost extra-curricular, like shots of adrenaline administered to a corpse and not a living being. The film’s pulse beats rapidly, and is most felt when it holds its breath, daring us and them to gasp and breathe in a pitch of quiet as danger lurks around the corner. Although Allied’s words don’t mean very much, the brief intermissions prove to be as revealing as they are relieving. 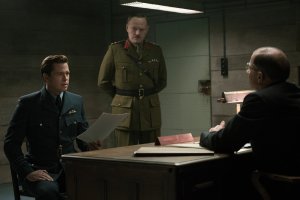 For two hours, I watched a film that I so badly wished had been told from a countered perspective. The real internal anguish and emotional centrifuge can be found in Cotillard’s layered performance as Marianne, but Knight chooses to tell the story from Max’s disinterested perspective. The decision loses resolve, mostly because Pitt, for whatever reason, seems to be idling along without care or concern. Pitt’s biggest strength as an actor is his naiveté; here he’s too stoic and withdrawn, careless and frozen. Perhaps the most disheartening aspect is seeing the continued decline of director Robert Zemeckis. He shoots scenes fluidly, wastes little time, keeps building and moving forward. Zemeckis could be an auteur and a mnemonic illustrator of Hollywood’s backlot Golden Era, but his persistent and remiss use of CGI cheapens all of his most recent work. Allied is decent, and fine, and refreshingly upsetting, but I can’t help but wonder what this could have been had Zemeckis focused on the tainted beauty of the two leads rather than blitzkrieging the beauty of the long-stretched picture’s curb appeal with well-to-do visual knockoffs.

“I keep the emotions real. That’s why it works.”