American Honey can only be a film that lingers with you if you take the proper time to linger in its presence. Director Andrea Arnold’s picture stands at a massive and intentionally overlong 163 minutes, which, as an artistic expression of story driven decision, puts the audience into the loitering mindsets of the movie’s magazine selling wayfarers. It’s so hard for me to sit here and write and think and separate the experience of watching this film from the firsthand aimlessness which I have taken part in, although to a far lesser degree. The consequence of impulse and the gravity of choice can be found – through a mix of caring personality and casual sexuality – in every frustrating second of American Honey. I haven’t seen a film more bound to the concept of lost identity found in the arms of brethren since last year’s Girlhood. The parallels of both movies, and their overall effect, feel concomitant as well as immediate.

The first time we see Star (Sasha Lane), she’s dumpster diving for food, finds a whole chicken, all while taking care of two children. The little girl a blonde, the young boy a redhead. Clearly these are not Star’s kids. She’s not physically old enough, and from her dark complexion and dreaded hair, the story insinuates this discrepancy. Star may have maternal instincts – which we’re privy to discover later on are hopes of many pregnancies – but she’s also 18, that rare age where you’re declared an adult by society but still feel as innocent as the transition from 12 to 13. The numbers don’t define behavior even if societal norms say they should. So when Star sees an unmarked white van full of vagrants drive by, blaring music, one man bare-assed against the window mooning the afternoon Texas light, she’s naturally intrigued by their disorder. 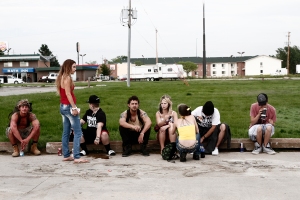 Star runs into Jake (Shia LaBeouf) at the supermarket. She gives him a stare, he looks directly at her. Later on, as is normally the case, she casts her eyes away, wanting to know she is being seen but unwilling to initially reciprocate the affection. Flirtation in cinema rarely feels this real or looks this attractive. These two are of the same DNA, being cozy and awkwardly cute and overtly affectionate for mere strangers. Jake’s confusing to her. So as her trainer in the art of selling magazine subscriptions through cunning tactics, Jake looks at her without abandon or permission. As his eyes linger, so do ours. He seems better suited for the 1968 documentary Salesman yet still tailored for the present, a globetrotter of convincing and appealing charisma donning the garb and the braided rat-tail of a man all too comfortable in his own otherness. Jake looks different and treats Star differently than the rest of the group – or so we assume. The appeal of their blood-pumping romance comes with a tethering bungee rope effect. They push and pull and fall out of love, but we know it’s with the hope of being caught up, maybe even swaddled or held. That emotion will be all too real for many viewers.

Arnold’s film is an untamed show horse, and she wants us to ride it unsaddled through the Midwest countryside, literally feeling every bump and bend in the road. Not all that much actually happens that is of instant value; the story is born from modicum ingredients and not from vast technique, which Arnold’s disinterest for restraint and cohesion certainly illustrates. But she’s built a nest for her cast to ramble inside of, tempting them to leap from the weaved twigs to the roads and parking lots below paved by modern interpretations of Jack Kerouac. Thankfully LaBeouf is no stranger to the weird. Like any creative should, he explores the nuances of the terminology, and again puts his money where his mouth is. His daring demeanor is matched by a devoted sense of boyish professionalism. As for newcomer Lane, she takes that jump from start to finish and delivers one of the best performances of the year. Her blend of concrete stubbornness and fragile humanism can be glimpsed through her eyes and her expressions. She is faultless, even bordering on the divine.

American Honey stands apart from the rest of independent cinema as an outstanding collection of diverse talents, diverse settings, and diverse methodology that somehow always maintains a sameness while being entirely unique. The picture is a fusion of all the sub genres of the so-called Southern Americana, bubbling over the lips of the melting boiling pot, stirred along intertwining bread-basket crossroads. Arnold combines the alienation of an Agnès Varda inspection on a reverent Dr. Jekyll with the exploitation of a Harmony Korine take on a drunk and stoned Mr. Hyde. Because of this, we realize how the ambiguous lyrics and screeching notes of Lady Antebellum’s titular song clash with cinematographer Robbie Ryan’s images in such a tangible and illusory manner. It’s hard to look away when you’re witnessing something so underwhelmingly sublime and so overwhelmingly euphoric. I don’t know how often the normal person blinks per minute. However, I know that for nearly three hours, alongside a bricolage of lost youths, I was happily below average. Fool around with this bridled bedlam of a film.

“You’re not the only wolf.”