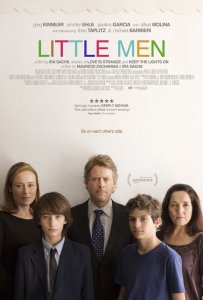 “If you move in, I can show you around.”

When you read that quote and watch Ira Sachs’ latest ode to New York – his third straight in four years – you can’t help but feel his love for the big apple. He’s only taking small bites here and there, making little movies about little conflicts and savoring the taste. Sachs’ recent stories may be mere microcosms of the world at large, but under his scope, in a city with as much personality as a sentient being, Little Men delivers a small package full of big and honest truths.

If you look closely at the images I selected for this review, you’ll see one of the trademark tools Sachs emphasizes in his work. Interpersonal conflict and inward-thinking tend to be represented by mismatched gazes; the characters literally don’t see eye to eye, let alone look in the same direction. For audiences, that creates multiple vantage points to possibly align with. Do I agree with him? Has she made a valid argument? We don’t always know who’s in the right or the wrong, and by keeping Little Men on two level-headed yet opposite sides, the film becomes a causeway for us to travel back and forth.

The Jardine family moves back to Brooklyn after the passing of Brian’s (Greg Kinnear) father. He’s an unsuccessful actor married to breadwinner Kathy (Jennifer Ehle), their precocious son Jake (Theo Taplitz) an outsider artist. Below the apartment is an outdated dress shop run by Leonor (Paulina García), an unprofitable tenant allowed to stay because of Greg’s lenient father. Bills must be paid though, thus finding the two families entering a financial feud, the ugliness amplified by Jake’s new friendship with Leonor’s son Tony (Michael Barbieri in a breakout performance). Little Men doesn’t care to concern itself with loud uprisings or shouting matches. Big problems can be handled in small, insightful ways.

Sachs’s 2014 picture Love is Strange handles the exact same topic about the skyrocketing New York leases forcing people away from their homes, or in this case place of business, which may be the more detrimental of the two. It almost seems as if he had one idea and got away with making both written treatments. They aren’t companion pieces or intellectual counterparts, although they do transpire in a similar rhythm. Little Men can be uplifting, wrenching, and sensible all in the same scene, but Sachs tackles such quotidian slices of day-to-day life that it becomes a roadblock to resonance. These are the private conversations being held behind all of the doors and we’re just eavesdroppers, cupping one ear to listen in before moving onto the next. The walls can talk, and talk intelligently, but only leave fleeting and passing impressions. At least we get to briefly hold them.

“They’re not all gonna have the brains to know when to insist and when to stop.”