“Finding the tangents in the framework; therein lies the artistry.”

I remember my first day on a college campus as clearly as I do the last. Arrived as an angelic young man averse to parties and adhering to my sheltered private high school upbringing. Three universities and four years later I left in cap and gown, smelling like a brewery from the prior night’s celebrations, clothes tainted with smoke from my two weed enthusiast roommates. That was my unique experience, except that it’s one undoubtedly shared by many. And that is the transcendent display of adulthood which Everybody Wants Some!! puts front and center. This ain’t a plotted out piece of fiction either. Not even close. Up there with the best and most entertaining features I’ve seen all year, Richard Linklater’s latest opens the passenger door and waves us into the backseat, guiding us on a tour of diverse mindsets coming together into one unified culture. 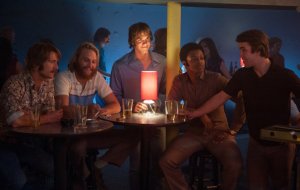 Granted, from the perspective of the bullied boys and the borrowed women who may have actually encountered men similar to those in this story, Everybody Wants Some!! may appear off-putting. To remedy, equality can be found behind the womanizing and the man-hating during a post solstice Summer in 1980 Texas. Labeled as a spiritual sequel to Dazed and Confused, Linklater wisely decides to have zero tie-ins or loose strings. I’d say it’s relatable to that past film in its hope for a promised future, a disinterest with the past, and a binding dissolve into the present. This is period piece filmmaking without any of the finite conclusions serving as an endstamp to each enlightening sentence, stuck somewhere between a telegrammed “STOP” and a text messaged “Hey.” Linklater flirts with reality so closely he mirrors it. 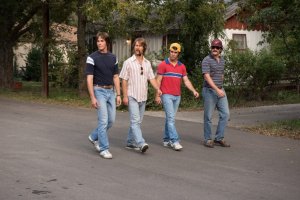 Jake (Blake Jenner) is the new guy in the baseball house. A talented righty on the mound who lounges around with gangly arms left open and overturned for a handshake to whatever comes his way. Girls, beer, marijuana, ping-pong. You’re likely to encounter the same stratified and pubescent men in a modern frat house. The difference here lies in how much Linklater loves his characters. The stoner, outsider, horn dog, theorist, bookworm, hothead…they’re all the same person. Linklater, himself a former college baseball player, doesn’t rely on jock stereotypes. Instead, he utilizes fairly one-dimensional characters and expands upon them by presenting a contrasting yet tirelessly engaging assemblage of XY chromosomes. By sheer virtue, and by the shingles adorned with lawn chairs and empty Lonestar cans, the gapped age group is shoehorned together under the same roof. Everybody Wants Some!! shows the positive effect of makeshift brotherhood. 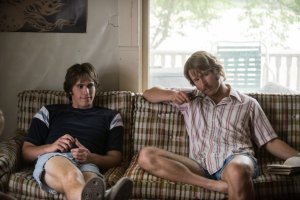 They may be a baseball team, but outside of one scene, these are just young guys who exploit their athlete status to reap benefits. Free cover and drinks at the disco hall. Breezing through easy majors. Inviting women over for a lay. They’re animals with intellectual counterparts that take a four-year hiatus to explore and try new things. Smart and observed takes on life are given to balance out all of the self-professed “fuckwithery,” giving the film sincerity matched by an abundance of aloofness. The casting choices are all pitch-perfect, but the most interesting character is Finn (Glen Powell in a star making turn). Finn’s the wisecrack, a rapid fire smart guy who says he just talks to talk. And what makes him so compelling is that unlike the rest of the group, he knows the party is temporary and sports won’t be in his life forever. In a way, he’s a wiser David Wooderson. Had Finn said the famous line, it would have ended at, “I get older…”

Once again, Richard Linklater shows his mastery of conversational dialogue, somehow treading the same waters of almost his entire filmography without the area getting tired or old. What impresses me most with his movies is how immediately we’re convinced by the setting on-screen. I never questioned the time or the place, using visual cues and year specific soundtracks to foster an evocative remembrance. It works whether you lived through it or not. So while it might not be as quotable as his take on the 70’s, Everybody Wants Some!! is the funnier, more riotous movie of the two. Add in Jake’s real romance with the girl from move in day and this one also gets a dramatic through line over its two hours. Even so, the real reason to see this film lies in the consenting nature of these adaptable men. From disco, to a country bar, to a punk club, to a theater party. Ask yourself what the reasoning behind the title is. Then remember what every walk of life is chasing here: a good time. With caution and with heed, applying a yes mentality can introduce you to new experiences. Everybody Wants Some!! – a truly hilarious film destined for cult classic status – knows that’s the only way to learn and to grow. I haven’t had more fun at the movies in 2016.