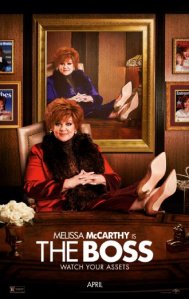 “Thank you for the groveling.”

The Boss is not the kind of movie that I typically enjoy. Overlong and errant ad-libbing, underwhelming direction, written without finesse. Grade it on paper and more categories fall into the negative than the positive. Yet, despite the slew of structural and content issues, it’s a film that does what it is supposed to. And that is to stir laughter. Most American comedies fall back on crude and crass humor without establishing an emotional connection where the maliciousness is born. It’s not important for us to justify the actions of the characters; those are entirely their own. However, it is crucial that we can understand why being mean was the more attractive choice. A cause’s rooting place is extremely telling. The Boss might not rejuvenate the genre, but it does give briefs flashes of hope.

Melissa McCarthy stars as Michelle Darnell, one of the world’s wealthiest women and also a teeming egomaniac. She’s basically Kris Jenner’s thirst for attention meets the insider trading past of Martha Stewart. We’re introduced to Michelle at her peak before a quick fall from grace, landing in a federal correctional facility and having all of her assets seized. Many of the side characters are rather limited or used solely for gags, yet since Michelle hits ground zero so early in the film, we’re able to evaluate and question how she’ll turn things around. Regardless of the script’s many outbursts, McCarthy still manages to develop a full arc for this woman. She comes from a place of isolated pain and has substituted friends and family with the face of Benjamin Franklin a few million times over. Michelle is a mean, selfish lady. But we know why. 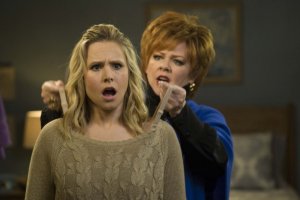 The plot of The Boss matters less than the effect of the various scenarios on our main characters. Kristen Bell plays Claire, Michelle’s former assistant and new temporary roommate. With Claire’s daughter in tow, the three form a surrogate family of sorts, humanizing the lead in the process. Things are good when we’re with them and consequences are small. On the flip side, there’s Peter Dinklage as Renault, Michelle’s former lover and current business nemesis. Dinklage overacts to the point that his scenes are more parody than comedy, whether that was the intention or not. Even in those moments, the film pulls a move of meta self-awareness by acknowledging the ridiculous foibles through dialogue or body language. Claire asks Michelle mid sword fight, “What are you doing?!” The obvious and blunt response is, “I think it’s pretty literal! We’re having a sword fight.” Similar problems remain persistent over the entire run of the film. Thankfully though, The Boss at least attempts to right the wrongs. 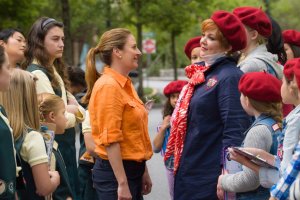 While the film surprised me, especially a scene stealing Tyler Labine as Claire’s boyfriend, it’s still a shining example of director Ben Falcone (McCarthy’s off-screen husband) failing to play to his wife’s strengths. There’s too much freedom with the dialogue, making Michelle a woman in the know and completely clueless. His choice for the opening is loud and abrasive. Worst of all, he features a slow-mo fight scene between rival girl scout troops. He just doesn’t have a handle behind the camera. McCarthy comes in to right the ship by pushing cruise control and setting the pace to whatever speed she deems fit. She’s come a mighty long way as a dramatic actress since her early Bridesmaids days, developing an ability to look into the camera and really make you feel what she’s feeling. This is a movie I can recommend but not fully support. Nevertheless, with the overwhelming number of bad comedies invading cinemas recently, you can certainly do far worse. Honest laughs now come at a premium, making The Boss worth the price of admission, unless of course you break the bank at the concessions.

“There’s a family out there for everyone.”