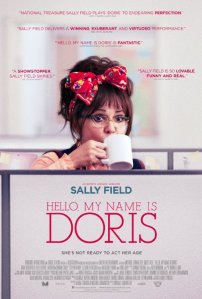 There’s been a positive trend going on in movies lately, allowing stories to revolve around grown women actually living and behaving like grown women, and the latest example comes to us in the form of Hello, My Name is Doris. It’s a film told earnestly, chock-full of quirks and clichés, sometimes overwhelmingly shy and at others painfully awkward. That might read as a negative, but in the hands of Sally Field, Doris – more than anything else – just feels flat-out real. Cinema is funny that way; we meet people and when executed properly we openly believe the fake to be factual. Hello, My Name is Doris trusts itself so much that it becomes increasingly difficult to not buy in. Each one of us has a higher purpose; here we’re prompted to never quit searching.

Fresh off the heels of her mother’s passing, Doris (Sally Field) is pressured by her brother Todd (Stephen Root) to move out of the family nest she’s never had the courage to leave. She has worked in a company’s accounting department all her adult life. She’s a cat lady, a hoarder, only has a handful of friends. The film itself is pretty uplifting and positive, but we know that the vulnerability was developed in a place of real castigated and volunteered loneliness. Doris suffers from the tragic possibilities that arise out of asking yourself “what if” one too many times. As the film chugs along, brief glimpses into her past are revealed, giving a sense of all the events that have brought this woman to be at the point where she is at in her life. 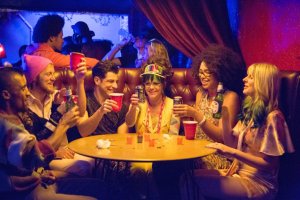 Movies like this one need incentive. What’s her reason? Her cause? Her motive? For Doris, everything becomes about trying to woo the new, young, handsome man in the office. He’s John (Max Greenfield), a simple guy who seems too nice to be true until we realize he actually is that kind. Greenfield plays the role wonderfully, donning a constant grin and an unfettered concern for others. Both attributes attract Doris, and her school girl crush opens her up to try new, bold things. While director Michael Showalter lacks a little control over the movie’s tone, bouncing back and forth between snappy sweetness and mental health drama, he wisely puts the core of the story’s humanity in the fidgety arms and pensive eyes of Sally Field. 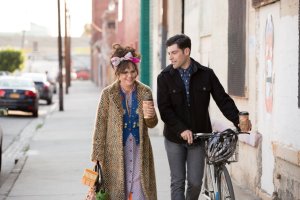 Every now and then the film takes a tangential turn that feels forced, or tired, or a little too out of the realm of possibility. And that’s what makes Field’s performance so full of craft. Doris is a very complicated character living in a simple world. In the hands of a lesser artist she would have been nothing more than the female version of Milquetoast. Field respects the woman she is playing though, one with literal and metaphoric baggage inviting the past to weigh on her already heavy shoulders. As Doris lusts after John – a romance we know is not likely to work out – she experiences new highs and new lows that help to redefine the woman she’s always thought herself to be. Eyes are the greatest physical gift a performer can be born with, and as Doris’ progression towards the path of happiness and out of a lifelong lull comes full circle, Field is able to look at her audience squared away. Hello, My Name is Doris makes you feel good, gracious and hopeful.

“You say what you mean and mean what you say.”