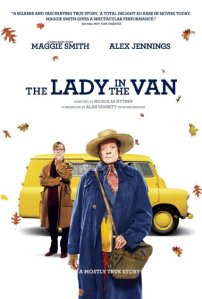 This “mostly true story” is one that’s also mostly contrived and manipulative. My personal feelings towards The Lady in the Van are much maligned because, in the feeble presence of an open and honest concept, the film locks itself in an emotional full nelson. It’s choking – suffocating even – and presents the events in such a wildly uneven and borderline paradoxical tone that it teeters on the edge of mockery. And while Maggie Smith gives another great performance to add to her illustrious resume, the spirit she brings is expelled each and every step of the way by the movie’s inability to humanize her character rather than exploit. The Lady in the Van is a prime example of selfish, indulgent scriptwriting. 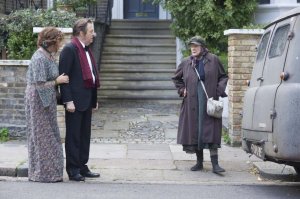 Smith stars as the title-bearing squatter named Miss Mary Shepherd. As things begin, we’re led to believe that she’s been involved with a hit and run accident. Fast forward to 1973 and she’s living out of her van on the streets of Camden. She’ll stay in front of one residence for a while before moving on the next. Miss Mary’s hermit lifestyle shuns away most human interactions, music, and hygiene in any shape or form. And as she is presented here, the mentally ill woman is entirely unlikable. For whatever creative reason – and I don’t think there’s a good one to be had – The Lady in the Van, similar to last year’s Welcome to Me, pokes fun at its not of sound mind lead character by showing preference to being loony and off the rocker. Sure, it’s playful, but also inhumane. 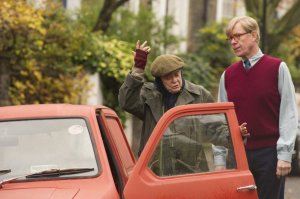 Most of her time is spent parked in the driveway of author Alan Bennett (Alex Jennings), the real man who penned the movie’s screenplay as well. In a poor creative decision, Bennett chooses to bring himself to life on-screen with two literal different forms; one version is the author, the other is the man actually out living. Their interactions are indicative of a writer who wants to be the story’s focal point instead of delving headfirst into the bizarrely captivating world of Mary. He’s a dull, forgettable character who occupies twice as much real estate as he should, and shows that Alan Bennett didn’t know how to right his own self into one singular version. The Lady in the Van accommodates for far more than its capacity can hold. 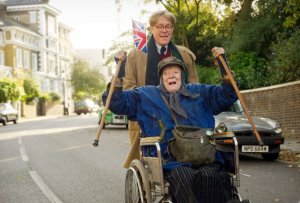 As the film starts, you get the quirky vibe that only charming British comedies can have. But The Lady in the Van is more cloyingly twee than it is endearing, bearing the hallmarks of the niche genre littered with bedrocks that submerge it again and again. In fact, the quality of the film speaks to the iconic talent of Maggie Smith. That she can take this woman – the Grinch incarnate – and turn her into someone both perplexing and fascinating speaks volumes. The Lady in the Van wants to be a lot like the stellar 2011 French dramedy The Intouchables, but mishandles the single most important part. Make the subject an open attraction, not an exhibition.

“Chin up love. We all got to go sometime.”