“Mortals, worship me or be enslaved.”

Few words describe Gods of Egypt as appropriately as bizarre. It’s not horrible, never that good. At times both an infinity pool with admirably designed sets and filled with enough puzzling decisions to just as easily be taped off as a cesspool. What’s strange – possibly even disconcerting for director Alex Proyas – is that the peculiarities actually work in spats, whether intentional or not. And then comes the gaudy CGI, the pathetic one-liners, the fever pitches of amateur writing. Proyas seems to know what he is doing, showing brief flashes of his obvious capabilities. Gods of Egypt may be inspired by movies of old, but this puzzling picture regales its audience with too many styles. Clash of the Titans this is not, although the elements at work butt just as many heads.

Proyas’ film boldly goes into the blinding light of day, setting the scene for an alternative version of Egypt where Gods live amongst man and vice versa. We join in at the passing of the crown. King Osiris (Bryan Brown) is to hand the thrown to his son Horus (Nikolaj Coster-Waldau). Clearly channeling Shakespearan tragedy, Osiris is abruptly killed by his envious brother Set (Gerard Butler), who then captures the throne by defeating Horus in a duel. All the while, petty thief Bek (Brenton Thwaites) and his love Zaya (Courtney Eaton) stand in the crowd, unknowing of their own fates becoming so twisted with those of the deities. Gods of Egypt mostly suffers from a convoluted plot that appropriately exhibits the telltale signs of congestion. It’s rush hour traffic on a two lane country road. Try as best as you can, but you just can’t get by in the passing lane safely. You’re better just to stay put and look at the scenery.

Initially, Gods of Egypt marginally succeeds by conducting itself as an ode to films of the past. The grandeur and tawdry sets harken back to the likes of many a 1950’s epics. However fake they may obviously be – both then and now – the fact that they are tangibly real always seems to give a sense of effort to dramatize a time and a place. This is 2016 though, meaning that the high school play props have been upgraded. We can now use computer generated bursts of flames, gigantic fire-breathing serpents, and soar over the movie’s re-imagined ancient Egypt. Admittedly, I unwillingly enjoyed those parts too. Proyas capably directs the action pieces even if they don’t particularly stand out. Gods of Egypt functions, just never all at once, falling victim to the curse of most modern adventure filmmaking. We’re given more and more and more. Yet its multiplied by zero worthwhile story, resulting in an outcome just a fraction above a deficit. 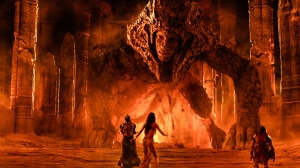 As a film, it feels more like an exercise in SparkNotes test taking than a full on imagined curriculum. Some parts literally fly by. Others come to a standstill, bloviating about rules and trespasses and confronting the impossible. Gods of Egypt just never decides what it wants to be, heavily borrowing from the bombastic B-movies of the now rather than the exquisitely dramatic films of the past. It’s Conan the Barbarian with just a touch of Tron. The Beastmaster meets 2015’s straight to VOD The Scorpion King 4: Quest for Power. Sensible to a degree and extravagant to a fault. Proyas tackles this classic Egyptian folklore through a digital pinball machine. Bells, whistles, lights upon flashing lights. Not often does a movie prove the phrase “sometimes less is more” by actually accomplishing both sides of the spectrum. Gods of Egypt moderates its own arguments rather than stepping up and decidedly taking a stance or a side.

“This is becoming unacceptable.”