Spotlight is a tremendous piece of filmmaking, mirroring its true story inspirations with unrivaled journalistic integrity and perceptive inquiry. From a technical standout this clearly ranks among the best of the year. And yet, I was left wanting. We all know that the film is based on real events set at The Boston Globe in 2001 uncovering years of concealed illicit activity by the Catholic Church. So, since we are privy to the information, it’s imperative that the movie draws our glass chins in close enough to deliver a jaw-dropping punch. Spotlight lingers, but not long enough, and as heartbreaking and draining as its last moments are, the film does not condemn the sins of these despicable men hard enough or closely enough to prompt the kind of energized disgust and motivational seek for change and retribution that it should. The substance is there, but it has all the poignancy of plain print.

The movie starts strong and fast, with a new editor aboard named Marty Baron (Liev Schreiber) coming in from Miami to man the helm. Despite the opening’s strength, there’s not enough clear setup from the get go, and Marty seems to decide out of nowhere to go after the Church. Is he a whistleblower or just looking to make a drastic first impression? Who knows, but it takes the Spotlight team to dig up the facts and get to the bottom of how the controversy has slipped through the cracks. They’re led by Walter Robinson (Michael Keaton) with the investigative team members being Mike Rezendes (Mark Ruffalo), Sacha Pfeiffer (Rachel McAdams), and Matt Carroll (Brian d’Arcy James). Spotlight’s script might not dig deep enough, but it’s fueled by impressively character specific dialogue said in unremarkable and incredibly authentic locations. Not since All The President’s Men have I seen a film set in the field of journalism that feels as true to the nature of reporting as this does. It’s like watching the inner workings of a grandfather clock, although it’s more Shattered Glass by design.

That being said, Spotlight’s characters are more greeting cards than they are love letters to individuality. Sure, they each speak in their own way and in their own rhythm and cadence. All raised Catholic and now non-practicing, as is usually the case. However, even though we see so much of what they do, we do not get nearly enough background information about each person to know who they actually are. They live to work and report, and as an audience, when the dust settles, we must be given unambiguous and purposeful details that tell us a crucial detail or two about the specific character traits. Spotlight is a fact-based narrative, and when films tackles that angle of well-known reality, the viewers need a fully realized drawing up on screen rather than people who act more off of serendipitous findings than behavioral ticks. The threats that they face are overwhelmingly real, and yet they feel as ominous as an in school suspension. Why not go for expulsion? 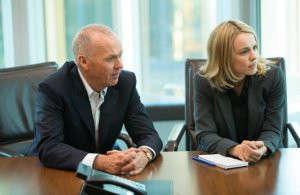 Tom McCarthy’s direction on the picture has been regarded as workmanlike, which it is. The refreshing simplicity helps you interpret the subtlely visual mise-en-scene placed throughout. His use of everyday Joe’s from Boston even further accentuates and defines journalism as an unglamorous job, and Spotlight relays that ever so accurately. That doesn’t mean it pulls the necessary emotional response though. During a pivotal scene, Pfeiffer confronts a guilty priest, willingly acknowledging his shame with red hands held high and a childlike diffidence. McAdam’s Pfeiffer looks at him with suspicion, bewildered, wondering how he could be so callous. It’s the film’s most important moment, and rather than being towering, it falls beneath the movie’s unencumbered fixation on finding the next clue and the next story. Spotlight sports greats performances, especially a nuanced Michael Keaton. And it has some of the year’s best editing and directing, utilizing Boston’s association with faith and enamored Catholicism by placing churches in almost every outside shot. Sometimes you have to be relentless about what you’re chasing. Spotlight, hindered by its own binary background in journalism, just doesn’t appeal to as many senses as totally and as fully as the wide-ranging medium of film is capable of. As literature it’d read as riveting. As a movie it’s merely informative and engaging.