Christmas, Again comes to us in the midst of the holidays, and what a truly surprising, methodical, well-rounded gift it is. Should you turn on your TV or listen to the radio or walk through the packed aisles of department stores, you’re bound to be inundated with a relentless one-track cheer. But that narrowly represents the emotions of so many. Some people are sad, alone, and cantankerous as a direct result of the screeching carolers and bright lights. Christmas, Again uses it realistic narrative to attentively depict the peak of the season’s greetings undercut by the lows of loneliness, mixing misanthropic maudlin with innocent possibility. It’s one of the most unconventional and unorthodox Christmas movies I have seen to date, as well as one of the best.

Set in New York, we follow the life of Noel (Kentucker Audley), a Christmas tree vendor going on his fifth year in the same lot. Most movies would make a wisecrack about a man with that name in this world doing this type of job. Christmas, Again is smarter than that though, and Noel’s distinct character traits allow him to shrug it off as mere coincidence and get on with his work. It’s his first time on the job without his Mary-Ann, and her void is filled by a young guy and his girlfriend who work the day shift. Noel is an incredibly despondent individual, volunteering to work the nights to avoid human contact, holing himself up inside his tiny little trailer. He finds warmth in isolation. 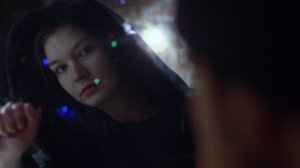 One night he stumbles upon a girl passed out on a bench. Gum in her hair, one shoe missing, cellphone in the hands of the homeless man biting off this little piece of the big apple with her. She’s Lydia (Hannah Gross) and Noel gives her shelter for the night. You expect a romance to start between them, but again, this movie has more on its mind. Written and directed by Charles Poekel, the first time filmmaker shows uncommon command over his story. Most of that has to do with the fact that the film is a reflection of his own life. Poekel has sold Christmas trees before, giving off a deeply rooted sense of understanding, telling us through relatively little dialogue that these moments have actually happened. This could be a one-hit wonder from a man simply revisiting his past, yet even if that’s the case, what a wonderful record to lay claim to. 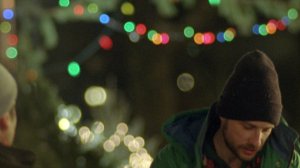 Parts can be a little perplexing with some minor details never fully fleshed out, matched by the score seemingly played through an old gramophone. It gives us substance to chew on. As does Kentucker Audley, delivering the kind of mesmerizing and awards worthy performance that will mistakenly go unseen. Poekel’s film doesn’t give Audley much to say by way of lines, but Noel’s tragic dejection is effortlessly conveyed through his face. Hannah Gross proves to be fascinating as well as Lydia, a rich character brought to life through her evocative eyes and gleaned desperation. These are two characters who live reluctantly. Hell, even the comma in the title implies that. But their interactions, cut short in the vein of the heartbreaking 1945 film Brief Encounter, propel them to gingerly take baby steps forward. As they do, we’re introduced to different customers from all walks of life celebrating the holiday however they deem fit. Christmas movies normally thrive on routine. This embraces how diverging traditions manage to converge together, eyeballing its story through the little moments: undressing a decorated wreath, a blanket catching fire, a blossoming tea flower. The tiny bits say more than words can. We don’t see everything, but we see enough, and by Christmas, Again’s ending your mind will continue on with writing where the story might go next. That’s the sign of a great movie.