“Just use this as an opportunity to calm down.”

Nasty Baby is a film that sets out to alienate its audience. We first meet a performance artist named Freddy (played by writer and director Sebastián Silva), and through his interactions with the world around him, we get to watch a character dealing with the same emotions that we experience as an audience. Now, clearly, this movie isn’t for everyone, and I’m not sure it’s really aimed towards anyone either. It skips from one genre to the next, from comedy to dark drama, as well as a voyeuristic approach versus a withdrawn aversion. So even though the film’s off-putting tone and hard observations can be muddled, the dark and stormy delivery remains intoxicating. Nasty Baby builds anticipation while pushing us away, and we just keep chasing.

Whether or not you enjoy the film is one thing, but the chemistry between the cast is undeniable and another beast altogether. Less like a new hardback and more like one pulled off the shelves of a used book store. Creased spine, tears and tatters, a little bit of dust. Similar to an old book, Nasty Baby has a past life, even if we do not know it or ever even see it, and it pours through the expressions and interactions between our trio. I’ve already mentioned Freddy, who is dating Mo (Tunde Adebimpe, you might recognize him from the band TV On The Radio). Their mutual friend Polly (Kristen Wiig) is a nurse longing to be a mother. As such, she asks them to donate the sperm that will one day become the child to a progressive and modern family. They’re happy to, but with their choice to bring life into the world comes a dilemma to take a life, grabbing the narrative’s wheel and pulling an abrupt u-turn in rush hour traffic.

The moral conundrum is one that you should find out for yourself. It may be predictable and hinted throughout, yet despite that you really aren’t sure when it’s going to happen or where. To Nasty Baby’s credit, being as artsy as it is, the movie shows little concern for timing or standard plot development. Normally that would be something that would make me shake my head from irritation. However, Silva really knows what he is doing – or at least feigns with ease – and the construction feels more twisted to fit the film’s theme rather than for the sake of being different. Having said that, I’m not sure what the theme is. While it can be maddening to not clearly discern the movie’s intentions, you can always tell that it is about something, whatever that may be. The fact that it plays as well as it does without much lucidity signifies its strengths rather than its weaknesses. 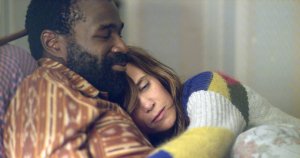 From the get go you tend to think that Nasty Baby is going to be another run of the mill indie flick coasting along on once unobserved lives. The pretty spinster nurse Polly and the interracial gay couple of Freddy and Mo. Inferior films would have used them as props to purport a message, probably seeking equality or being labeled as different. Here though, while those parts of their lives are all acknowledged, and sometimes even challenged or disrespected, they live in a world comfortable enough to see the new and the old normal through the same lens. I still don’t think it works that well as a straight piece of fiction, but parts feel utterly real, and that makes it familiar while also being new. Maybe Nasty Baby is about the hardships of love and parenthood and community, and if that’s the case, it shows how vital it is to frame and maintain a network of family outside of our own immediate members.

“It’s not a decision to be made lightly.”