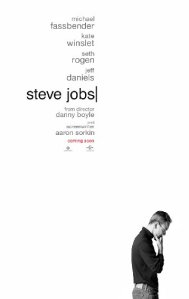 “People don’t know what they want until you show them.”

What you don’t know when you walk into Steve Jobs is that you’re waved in through a revolving door. The movie is a triptych, three panels, and in this case three acts, set side by side that are nearly identical in structure and content. Unlike those forever moving doors, this movie is one constant stalemate, a lost soul in purgatory refusing the prayers or the thoughts of those trying to elevate it into the kingdom above or damn it to the fires below. You won’t hate it, will never care enough to love it. Remember in The Wizard of Oz when Dorothy knocks on the Tin Man’s chest and the pea-brained Scarecrow says, “Beautiful! What an Echo!” To that the sheepish Tin Man replies, “It’s empty.” So is the cursory Steve Jobs. 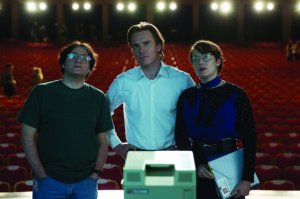 Act 1: Cupertino, California. 1984. The launch of the Macintosh computer. Act 2: San Francisco Opera House. 1988. The launch of the NeXT computer. Act 3: San Francisco Symphony Hall. 1998. The launch of the iMac computer. Those are the layers to this story, wearing one by one while cautiously applying flashbacks and sparsely tying each segment to the next. Steve Jobs is a very pretty movie to look at. Colors pop, it’s edited (poorly) to be quick, the satisfactory score sounds like something you would have made on an iMac yourself in a grade school music class before becoming symphonic. But I would argue that there is very little about this film to be called cinematic, and it sports a screenplay better suited for the stage. Simply, it’s the structure that doesn’t work. There is no flow, and instead of our main character developing before our eyes, it feels blindly blocked off as an afterthought. Steve Jobs is a fanciful and modern retelling of the Scrooge story, showing us the ghosts of Jobs’ past, present, and the future which we all now know. Instead of being linear it is repetitive, and our lead may as well be stuck in Groundhog Day. 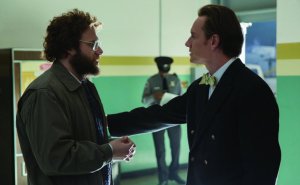 Michael Fassbender stars as the calculating egomaniac Steve Jobs. I don’t know how accurate the film is and I don’t care, because it shouldn’t matter unless extreme liberties were taken. Fassbender is a fascinating performer, capable of being subdued and effusive, clearly a star but always wary of the responsibility that holds. He’ll be a pacesetter in the awards circuit for this performance, and although I don’t think it’s the best work of the year, it’s a winning turn from an attractive man who will get people to tune in. Also good, and somehow ultimately forgettable, is Seth Rogen as Apple co-founder Steve Wozniak. Kate Winslet plays Joanna Hoffman, Jobs’ right hand lady and most trusted partner. Winslet is never bad, but her Polish accent is curiously off here, sometimes strong and at others entirely absent. And Jeff Daniels portrays John Sculley, the once CEO of Apple and the father figure/mentor to Jobs. But wait…there’s more! 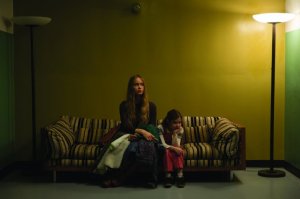 Jobs’ strings are pulled every which way during each of the product launches. Wozniak wants acknowledgement. Joanna is the maiden prodding him to do this and that. Sculley argues with him about people and names we never see, and therefore never emotionally register as real. There’s a hounding journalist, a threatened programmer, a woman trying to figure out how to turn the EXIT signs off so Jobs will have the blackout he wants. And then there is the father daughter story that Steve Jobs suggests it wants to tell, but since the film is so dense it’s often suffocated. We should feel emotionally torn watching a man deny being a little girl’s father in the face of a 94% likelihood paternity test. And yet we don’t, because the girl and her mother, played by Katherine Waterson with a fractured poise, are absent-mindedly left on the back-burner. The film’s dialogue is rich and we know it will be, this is written by Aaron Sorkin after all. Strangely, or maybe a matter of coincidence, many of the deriding lines apply to the movie itself. “It’s not binary. You can be decent and gifted at the same time,” Wozniak says to Jobs in his last plea for recognition. Steve Jobs can’t be both because it refuses to open its ears to hear that. 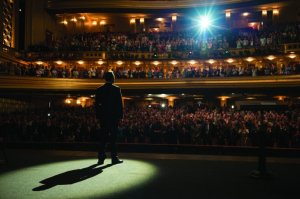 Aaron Sorkin is a fast thinker. His treatment of dialogue, up there with the greats of the trade, can rightfully be labeled as masterful. Without structure though, his scripts tend to fall apart. Steve Jobs is, in ways that extend past the isolating and narcissistic lead characters, much like The Social Network. That classic, one of the best American movies of the decade, was directed by David Fincher, the same man who signed onto this movie and eventually walked away, presumably out of foresight. Steve Jobs goes along ferociously while constantly on the move, spewing exposition from point A to point B. Danny Boyle is a director with a heightened visual style, and was not the right choice for this script. It needed moments of clarity and quiet, a second to catch its breath, not another shot of his pointless trademark use of dutch angles. The script’s wit and intelligence are out of grasp, a Golden Finch always just out of reach, due to the fact that Boyle cannot accommodate or harness the power of Sorkin’s written word. Steve Jobs doesn’t have a heart because it has too much head. Or as the Tin Man would say, “The Tinsmith forgot to give me a heart. No heart. All hollow.”

“People don’t like it because they think it doesn’t do anything.”