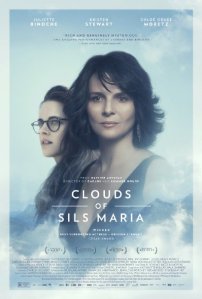 “One and the same person.”

Clouds of Sils Maria is a movie which promotes subjectivity. Its hopes are that we form an opinion, and that it stands contradictory to the conclusion anyone else who has seen it has made. It is, in and of itself, divisive. But that’s not what I didn’t like. Movies are allowed to be subjective, because after all, they are made by a subject (director), for a subject (the producer), with the aid of countless subjects (the cast and crew). That’s inherent with film. No, what I did not appreciate was the pummeling message without a story to enforce the blow. You can’t punch the audience with a drifting cloud or a dry wind. Clouds of Sils Maria is one of the rare instances where a film has a deliberate and worthwhile memorandum with no means of communicating it. It’s well written, well acted, and well directed. And somehow it’s an apologetically slow, tedious, uneventful movie. It’s as flat as celluloid.

Look this movie up. Seriously, go Google it. (Pause for a minute and make the search.) Okay, now that the look-up is over, know that the praise this film has received has been misguided and overhyped. Watching the movie is like playing go-fish when there are no cards left to choose from. It’s the same hand, played over and over, creating a false sense of sexual tension and identity complications that are never fleshed out or fully expressed. There is also no pace. Boom, it points us there. Bam, no transition, we’re off to the next spot. Like a play, Clouds of Sils Maria unveils itself like it is standing on a restricted sound stage rather than the boundless slopes of the Alps. Movies like this are hard. The actors must play a role while playing themselves and not letting their real life attitudes and affections enter into the equation. And this movie really does have phenomenal acting, but that doesn’t mean it makes any clear sense. 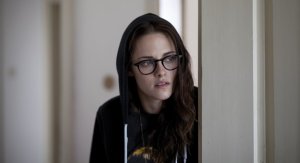 Maria (Juliette Binoche) is an aging actress, fanatical about youth, treading the waters of returning for the sequel to the project which made her famous. Always by her side is her assistant Valentine (Kristen Stewart), a young go-getter maintaining Maria’s lifestyle for her. Maria is self-absorbed, unlikable and unwilling to accept change. It all builds to a head in the form of Jo-Ann Ellis (Chloe Grace Moretz). She’s a classically trained American actress whose only screen experience is in big blockbusters. Think Lindsay Lohan in her meltdown stage and that’s who she was. Now though, she’s serious, and takes on the role Maria clings to. Maria has graduated to the older and supposedly more mature position. While Jo-Anna is only briefly in this story, we feel Maria’s constant fear of being forgotten. Simply, it’s not a feeling I enjoyed. 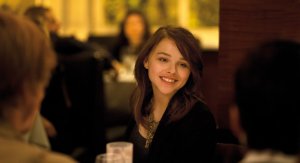 Clouds of Sils Maria is beautifully shot by Yorick Le Saux, whose recent work on last year’s Only Lovers Left Alive and 2012’s Arbitrage show his diverse skill set. He captures the picturesque landscapes and there is some excellent choreography. It can tango. But there is no life to this story, these characters, this film. When we watch movies, from the highbrow to the harebrained, we should be able to take a step back and figure out why it matters. Too many films are the equivalent of pointless conversations and too few really relay a cause in a way that penetrates you. This falls somewhere in between those two outposts. It commendably addresses Hollywood’s glaring issues with female aging, which is a problem that has only gotten worse with technology and the use of photoshop. But many movies have done it before and in a more creative manner, like last year’s The Congress for example. Sunset Boulevard is the cornerstone on the topic. In that movie the last image tells the entire story with a single line of dialogue and one excessively dramatic facial expression. Clouds of Sils Maria goes for that and fails because of its subdued style and muted voice. It foolishly fumbles around in the dark, reaching for that key moment, for energy, when all it needed to do was turn on the light. 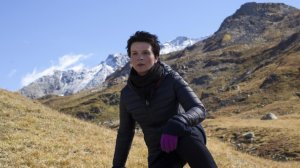 I appreciated the acting by two different generations of strong female actresses. Juliette Binoche is one of the greats, the kind of performer you see and know she was put on this earth to do exactly what she is doing. People will probably be a little surprised by Stewart and Moretz here too. Kristen Stewart’s career has been burnished by the Twilight series, but the woman can act. While many of her roles are similar, she’s still able to make them unique enough that they never fold over into one another. Moretz is a favorite of mine, brimming with the kind of capability you normally just don’t see in an actress of her age. Even as a young child you could just tell that she has a gift, and thankfully she cares enough to keep pushing herself. These women can’t save the movie though. Clouds of Sils Maria is as faceless and shapeless as the white pillows of the sky. The characters and the story are just mirrors, and depending on who’s looking at it, the reflection will always be different. I don’t like that. It’s cowardly, like a person changing their personality depending on who they are around. Be who you are. Say what you want to say. Do what you’re meant to do. By the time this is over you will wonder if it ever had a pulse. And the problem is that it’s not conscious enough to check in the first place. You can’t walk a tightrope without tension. Clouds of Sils Maria is a slackline.

“I think they want what comes next.”