Manglehorn, the latest feature from filmmaker David Gordon Green, will rarely be seen this year. It’s a little and narrow-minded movie. Which isn’t a bad thing, because like Green’s tumultuous filmography, the picture just has no real sense of purpose or direction. You can always spot a Green film. With the exceptions of a few highly unsuccessful dabbles into Hollywood studio movies, Green almost exclusively does little features inspired by his own Southern Gothic roots. He has a unique niche, and Manglehorn fits right into it. The eccentricity, the poetic narration, the undeveloped characters. Green’s style, when done correctly, always emphasizes atmosphere first and the people second. But this film never hits the latter. You get the feeling that it’s only titled Manglehorn because the lead character’s last name is Manglehorn, and that’s about the only thing you could call it, because you never get to know him. He’s the old curmudgeonly neighbor who you never introduce yourself too, for fair enough reasons. 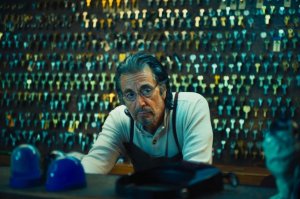 Al Pacino gives a tremendous performance in a dud of movie here as Manglehorn. He’s old, alone (save for his cat), and has a locksmith business. Manglehorn keeps away from family and writes letters to the great lost love of his life, Clara. The written words serve as our narration and the crabby old man’s own inner reflections. However, they are so cryptic, so pompously straining for levels of poetry, that they do not shed light on this man. By the third time around you’ll think, “Okay, we get it. You lost your love. Now tell us something worthwhile.” Pacino’s delivery of the dialogue is good as ever, but the words might as well be garbage, because it all belongs in the disposal bin.

Thankfully Holly Hunter has a large enough character arc to keep things going. She plays Dawn, a bank teller who Manglehorn makes a point of visiting each Friday for his weekly deposit. Hunter is an actress of the highest degree. She takes a simple character with relatively little to do and somehow makes her both relatable and heartbreaking. The two have a kinship that could be romance, and attempts to build that way, but because of Manglehorn’s fixation on the past and the script’s wandering narrative, we never really get there. This is a film that is full of distinct scenes, and few of them matter. Manglehorn goes to a club with a kid he coached in little league who’s grown into a jackass. He gets drunk and still shoots a distanced beer bottle with one straight aimed bullet. He watches a group of young men breakdance from a distance. They are all moments, yet none of them clue us into who he is, and even worse, why he is…why he exists, why we should take the time to try to know him.

I’ve seen all but one of David Gordon Green’s films, and its amazing how closely he sticks to the same formula and yields completely mixed results. Sometimes he’s brilliant and at others he’s overbearing. Green purposefully lacks restraint as a filmmaker, meaning not that his directing is ungraceful, but that his method of storytelling shows us everything. For example, here we get about a 5 minute scene of Manglehorn’s cat on the vet’s operating room table, being cut open, having a key removed from its small intestine, and then stapled back up. The scene has no point, no power. Green’s style works when his script is interesting and when the little insights add to the overall scope of the movie as a whole. Manglehorn certainly has compelling characters played out by two generational talents. It’s just too bad they live in a story that’s stuck at a constant standstill.