“There’s no room for heart in this game.”

And neither is there in Focus, a film so bogged down with convoluted side stories and bends in the road that you’ll eventually stop trying to care about these characters. For what it’s worth, Focus is a good movie to look at and its pretty picture is filled with pretty people. But it’s all stuffed into a Russian nesting doll. Once you start unpacking them, and by them I mean the many deceptions and cons played throughout, you realize everything is the same. They just vary in size and gaudiness. There is no world building, no definite set of rules that we as an audience know the story will either unwillingly follow or purposefully break. Focus puts its emphasis entirely on the foreground. Probably because past that it’s just empty, wasted space. 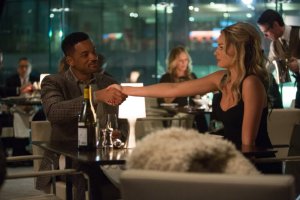 While the ending fades out into an abyss of convenience and far-fetched ideas stretched beyond their breaking points, I thought the opening showed a lot of promise. That’s because it evolves around the characters instead of the plot. Nicky Spurgeon (Will Smith) is a veteran con-man temporarily seduced by rookie cutpurse Jess Barrett (Margot Robbie)…or is he? Nicky sees through her scheme, but also acknowledges her skills, as well as her unmissable beauty. Jess goes through a tryout of sorts, leading up to their big con and steamy romance together. Past this point and the movie crumbles. Up to here, roughly the thirty minute mark, and I was incredibly hooked. That is what happens why you go for style over substance.

Smith and Robbie alone nearly make the price of admission worth while. Their naturally strong on-screen personalities and obvious personal chemistry really makes for a dynamic one-two punch in their vacillating relationship. It’s great to see Smith back in this kind of role as well. No living actor has more charisma than him, and here he plays the kind of complex and charming character we’re used to seeing him excel at. As for Robbie, following her impressive performance in The Wolf of Wall Street, she has officially earned her stardom. Sure, she is drop dead gorgeous, but the woman can flat-out act, successfully pulling off the story’s fun crime scenes along with the emotionally charged dramatics. Focus is never good, but thanks to its stars it is never entirely bad either. 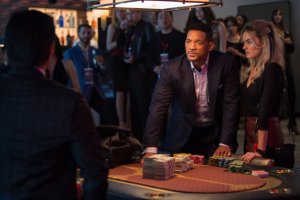 Either you buy what Focus is selling or you don’t. It’s that simple. I didn’t, if you couldn’t tell, or if you only read / skim the last paragraph. As a film it is comparable to a perfect game of Jenga. One where there are no consequences, no possibility of collapse. There is initially, but eventually we figure out that everything goes according to plan even when we’re shown otherwise, which makes the shrouded secrecy of the plot more cumbersome and lazy than it may appear to be. Nicky Spurgeon spews a whole lot of strained adages out during the film, one in particular being, “Get their focus; take whatever you want.” Writers / directors Glenn Ficarra and John Requa are just too manipulative here. They don’t get our focus, but they sure seem to take what they want. As a moviegoer and a consumer, it’s an unfair trade.

“Sell everything. Take no chances.”