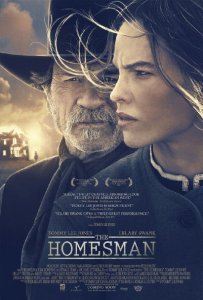 More times than not, westerns and period pieces tend to lack a sort of captivating or enthralling quality. It’s hard to be entertained by the past when you can imagine the future. Maybe it’s biological. With out front set eyes and forward moving feet, we’re designed to always be looking ahead. Simply put, The Homesman gets you to turn around, placing us in a foreign world in a different time. Its cracker-barrel story is one of nature versus nurture, of belief versus doubt. As topical on gender roles as any film of late, The Homesman allows us to experience the harsh challenges faced by those living in the new western frontier. 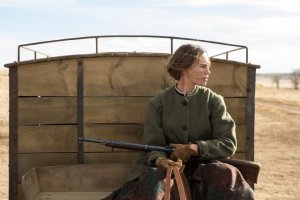 Mary Bee Cuddy (Hilary Swank) is a spinster, “uncommonly” unmarried for a woman of her years. She has a well-kept property to herself, plowing the fields with her mules and tending to the predominantly male associated chores by herself. She pretty much plays house on her lonesome. And she’d be an ideal fit for any man except that she is a bossy and plain lady, plagued not with a deadly disease of the time but one since man’s beginning. Miss Cuddy wants companionship, to be liked, and maybe even loved. It’s hard for her and for the audience to see her turned downed time after time, framed as a modern day girl continuously rejected after each proposal to a Sadie Hawkin’s dance. Mary Bee may appear to be headstrong, but she is a vulnerable, realistically drawn woman no matter the year in which she is placed.

A homesman refers to a person designated to return immigrants back to their home lands. As the title implies, it was typically considered a man’s duty, but Mary Bee is no ordinary woman. Her task is an unenviable one; return three insane women from whence they came. One insensible teenaged woman carries a rag doll following the death of her children to diphtheria. Another desensitized woman, fearlessly striding out into the bitter cold, opens her outhouse door and carelessly throws her newborn down the shitter, displaying the precision of a seasoned fairgoer at a ring toss booth. It’s disturbingly unforgettable. The third was violently raped by her own husband, a man desperate to have a son, and she’s the most troubled of the bunch. A biter, fighter, ready to attack anyone in sight. Why would somebody volunteer for this trip?

Miss Cuddy does so because she is not tied down by gender. Yes, she’s a woman, but unlike the sheltered, happily chore completing women of her time, she’s not afraid to scrap with the men. To get into the thick of things. Along her harrowing Oregon Trail-like adventure she meets Briggs (Tommy Lee Jones). In exchange for saving his life she demands his help, and he obliges. Cuddy and Briggs, wonderfully written characters with fully-formed backgrounds and identities, are two opposite people. The Homesman is not so much about the literal journey as it is about the choices, however big or small, that are made along the way. It might seem boring in parts, but it’s always unquestionably smart.

Directed and co-written by star Tommy Lee Jones, the movie veteran shows a continued knack for the western genre. Although I didn’t enjoy his previous directioral effort The Three Burials of Melquiades Estrada (I fell asleep twice), it was clear even with that movie’s uninspired story that the visual feel was there. Jones and cinematographer Rodrigo Prieto pay respect to Westerns of old, with title cards bearing resemblance in font and color, as well as absolutely striking establishing shots of the rolling hills and flat pastures. The Western is the perfect genre to illustrate the power of cinematography, and like Roger Deakins did in 2010’s True Grit, Prieto reminds us of the lavish beauty and danger our home once held. Save for some horrendous background CGI filling in when location shoots most likely weren’t possible, The Homesman is as technically sound as it gets.

It blows me away that Swank and Jones were both overlooked during the awards circuit for such strong turns in categories where lesser performances were acknowledged. For both, it’s up there with some of the best work I’ve seen either do. Our 5 week long journey with the odd couple is harrowing and unbearable, full of the kind of bare-knuckled and brawling nuance most westerns are missing. Still, The Homesman will turn many viewers away with its third act. These characters don’t change, don’t grow, never transform. They show faint gold rush glimmers of renewal. But it’s all pyrite – fool’s gold – a brief and superficial impostor of real weight and worth. Why is that good? Why does it work for the story? Because in the American West life and hope were scarce. Men were deputies of sex and violence and women were the agents of obedience. The Homesman is brave storytelling in a Blockbuster era where the easy route around the river is more appealing than the dangerous, engulfing ride across.

“God will strike you down.”