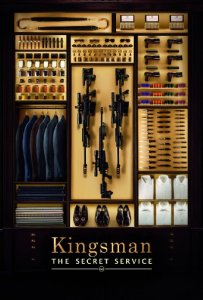 “We are first and foremost gentlemen.”

Kingsman: The Secret Service is a beautiful disaster. It also is not a bloody good time, veering into unnecessary and gratuitous barbarity. The action comes at you with a fury and is incredibly stylized, but underneath that disguise is an entirely cruel, heartless, savage film. Spy flicks win over audiences by making us wish that the particular world was real, that we were the ones with the fancy gadgets, fast cars and sharp tailored suits. Kingsman is adventurously dull, combining the look of a James Bond movie on shrooms and the sadistic pleasure from a teenage boy playing Grand Theft Auto, scrapping the story mode to go on aimless killing sprees. This was the first film of 2015 that I can confidently say I hated.

After the gruesome murder of Kingsman agent Lancelot, we know it’s imminent his spot will have to be filled and that the story will follow that direction. Eggsy (Taron Egerton), a young and hard-nosed Brit, lands himself in jail. As a boy a mysterious medal was given to him by Harry Hart (Colin Firth). It has a phone number engraved on it, and Eggsy was to call and repeat a coded phrase if he ever needed help. In the pen with one call is as best a time as any to phone a strange man from your childhood, isn’t it? 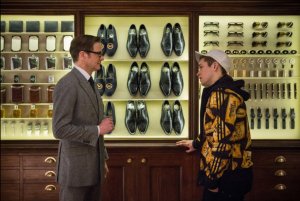 Hart invites Eggsy to take part in Kingsman training to possibly become the next in a long line of secret agents. His competition comes from stiff, haughty Cambridge and Oxford types, the kind of people who look down at and make fun of the street-smart Eggsy. It’s the most fun part of the movie, but I couldn’t help but compare it to the vastly superior training sequences from Men In Black (both films are based on comics, and for what it’s worth MIB came years before). The main problem with Kingsman is that none of the scenes really hit, even during the batshit crazy fight sequences. This is popcorn entertainment without any added flavor to build taste.

Samuel L. Jackson fills the role of Valentine, the movie’s bad guy. His desire is justified while his means of doing so definitely are not. Valentine is an eco-terrorist, disgusted with our destruction of the planet and acknowledges that nothing can be done to save Earth with our population growth that doesn’t seem to be slowing down (I wholeheartedly agree). However, he wants to be an exterminator, killing large numbers of people in a way that feels so far-fetched, even for this kind of film. From there it is a reckless and madcap race to rescue the world by, you guessed it, the Kingsman!

There is too much wrong with this movie to squeeze into one paragraph. Valentine is a cowardly bad guy with an irritating lisp and neither quality is ever explained. It’d be like giving him his Nick Fury eye patch and expecting us not to wonder why he’s wearing it in the first place. Details matter. Egerton and Firth are likable in poorly written roles from a badly pieced together script. As for director Matthew Vaughn, I have to say the film at least looks great, and the action scenes’ choreography and dramatic visuals are really outstanding. That is literally my only positive remark for an otherwise awful movie. Violence, like all things in film, should never be used without purpose. It needs to be there for a reason, has to have meaning. Kingsman utilizes it like a bad firework display where all of the explosions go off at the same time. There is no buildup, no grand finale, nothing to wow us. We get smacked in the face with an unentertaining show and then it’s over. It’s a one note letdown.