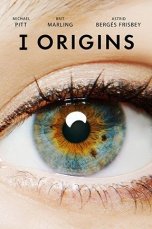 “I’d like to tell you the story of the eyes that changed my world.”

Eyes are the keys which unlock the gates to our own personal universes. Whether or not you’re religious, however you define whatever you call a soul, it’s undeniable how much you can perceive by looking into another’s eyes. Their emotions, thoughts, state of mind. You see as much in those two little optic forces of nature as they themselves glimpse every day. I Origins is a stirring and incomplete film, one that creates discussion but lacks the patience and finesse to go beyond itself and fully realize the broad themes and grand ideas set up throughout. A little less blinking and the story could have been truly special.

A 26-year-old PhD student in New York, Ian Gray (Michael Pitt) is obsessed with eyes. He studies them, takes pictures of them, and believes they hold the answers to disprove creationism. For Ian everything is scientific, nothing matters without factual, empirical evidence. The eyes that change his world belong to Sofi (Àstrid Bergès-Frisbey). She lives in the moment, hiding her past from Ian and pushing him to expand his outlook on life. While they are in love, they could not have more different worldviews. Ian laughs at the idea of faith. Sofi embraces it, suggesting that although some of us may be blind, physically or intellectually, it doesn’t mean that we can’t see or possess the power to look outside of ourselves. The first half is fairly meditative and generates an intriguing discourse, but the poor tonal shift to the second part of the story left a lot to be desired.

In order to keep things spoiler free, I’ll refrain from going into too much detail from here on out. Teamed with his lab partner Karen (Brit Marling), the two search for an origin species to prove their theory. They test thousands of subjects, looking for a creature with the DNA code to develop eyes but hasn’t yet. This part of the movie scraps the romance altogether and turns into a science fiction thriller, finding drama by using the classic needle in a haystack scenario. On their own, each half works well enough, but together there is a disconnect. The cast is great, and even though the over the top, unfocused script can be a bit absurd, it’s pretty hard to look past the movie’s ardent, even penetrating sense of awareness.

Writer / director Mike Cahill swings for the fences again with his sophomoric effort, but like his debut Another Earth, an equally impassioned project, it’s never a home run. He’s clearly a talent to watch out for and uses his films to really challenge the audience, seemingly inviting debate. Yet so far he hasn’t managed to piece it all together. Great filmmaking requires a keen and astute sense of balance. I Origins teeters quite a bit, but it never falls. It would have benefited from shelving the impulsive decision-making from the characters and replacing the extreme situations with more familiarity (you’ll know what I mean). I Origins asks some heady questions. While it may not give us the answers or all of the setups to find them ourselves, it certainly opens your eyes and makes you really look for a reason, even if it’s not there. That’s more than most films can say.

“My atoms have always loved your atoms.”