“We all have our ambitions.”

J.C. Chandor’s A Most Violent Year certainly is exacting, enterprising fare. It’s also one of the absolute best films released this year, flawless in its technical expertise and the subtlety of its large-scale story told in the most subdued terms. The film unabashedly emphasizes the American Dream along with the laurels and hardships each definition of the phrase creates. While that’s true, and it’s a core concept of the story, it’s more concerned with having a reach that exceeds your grasp, and whether or not you can really accomplish what you want in a grimy and desolate world without sullying your hands in the process. A Most Violent Year is a new American classic, and one whose message resounds and reverberates along the rundown buildings and homes of insatiable individuals voraciously striving for more, more, more. 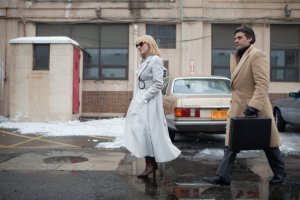 Set in the savage, mob-driven landscape of 1981 New York City during its most crime-filled calendar year, Abel Morales (Oscar Isaac) is an honest and decent businessman determined to do what is right. He’s the successful immigrant owner of the booming Standard Heating Oil Company, which supplies to residential homeowners. His progress threatens his industry partners and his trucks begin to be stolen and robbed. Drivers and sales people alike are hesitant to work for him. After all, they’re as likely to safely reach their destination as they are meet the butt of a gun to their face. Yet even in the face of dangerous threats, Abel strikes up a deal with the Hasidic Jews who own a waterfront property which will give him greater access and financial security compared to his competitors, as well as even more backlash. It’s a suicide wish for a man unwilling to load his gun.

Anna Morales (Jessica Chastain) comes from a mafia family, and although she doesn’t formally intrude on Abel’s business ventures, we can always sense she’s the one willing to do the dirty work to secure their future. Abel runs his business straight as an arrow, or so we suppose, but nevertheless is hounded by the city District Attorney (Dayid Oyelowo). It’s a downpour of problems for Abel. A criminal investigation into his business, the carjackings on his drivers, a foiled murder attempt at his lavish home. It’s incredible how he never cracks under the pressure, is almost always smooth, calm and collected.

While I felt a disconnect with his survival tale / near silent feature All Is Lost, it is now confirmed that J.C. Chandor is an undeniable auteur and storyteller of the greatest magnitude. He echoes Sidney Lumet, David Mamet, and the early work of Martin Scorcese with his cultural astuteness and enviously precise work on the page and behind the camera. I cannot wait to see what he has in store for us next. Also worth recognizing is Alex Ebert who produced the film’s echoing, synthy, brass layered and shadowy score which only adds to the already chilly atmosphere the film creates. Bravo to cinematographer Bradford Young to boot, whose work on Selma and here are both beautifully done. You can’t see this film and not touch on the absolute powerhouse acting though. David Oyelowo serves his character well and Albert Brooks does what he can with his small role as the Morales’ financial adviser. Then there is Jessica Chastain, who should have gotten supporting actress consideration for this role. She continues to prove she is one of, if not the best, working actresses in Hollywood.

I wish A24 Productions had promoted this film more, especially during awards season. Not that the accolades really mean that much, but more so to aim attention towards a perfect film that actually deserves it. And a large portion of that is due to Oscar Isaac’s best work yet as Abel. You never question his character or his relentless, tireless work ethic that separates him from his wife, his children, and his own ambitions. With his strong chin and Frank Sivero hairstyle, Abel embodies what it means to be a dreamer. To have goals and hopes and most of all aspirations. If he has to literally chase down his dreams in the form of another car thief, he will. If he has to use a handkerchief to plug the bullet hole in a holding tank from a coworker’s self-inflicted headshot, he will. He’s a complex, driven, and never overwrought man who says, “I like to own the things I use.” Use is the important word there. We get hints of his humble beginnings, of how he climbed the ladder to the top, but never so much that he’s a translucent figure. A Most Violent Year is a faultless homage to crime noirs of the past, and an exemplary illustration of the potential they have in the coming future.

“Look forwards. That’s the only thing you can control.”