“Do you ever wonder why we fall in love with a specific person?”

The vast majority of us have had the loves of our lives enter and just as easily exit as they first came. Mostly it was our own foolish fault, sometimes there’s. But either way there was an undeniable inability to meet in the middle. To join forces and say, “Okay, we’re here. This is us. This is now.” The Disappearance of Eleanor Rigby: Them, a film composited of two separate features, never makes that connection. It’s occasionally beautiful and stirring. Some may very well finish the movie and be left in awe. As for me, I left confused. Eleanor Rigby failed to capture my attention. Zero percent of my life experiences thus far have set me up to fully comprehend the emotional heft of this film. Where do they all come from? Where do they all belong? Eleanor Rigby never has an answer. 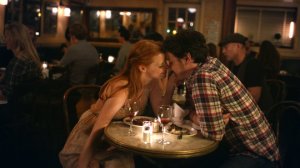 Married couple Eleanor (Jessica Chastain) and Connor (James McAvoy) are out for dinner. She’s sensual and persuasive as she takes off her heels and walks out the restaurant, telling Connor to follow her once the maitre d isn’t looking. While the opening dine and dash scene is as straightforward as you can get, it delivers incredible insight into who these two people are, what their dynamic is / was. Then suddenly we see Eleanor jump off of a bridge. From there it’s a crapshoot of scenes that just don’t do all that much. The beginning and penultimate moments are superb showcases of finessed storytelling and honest lead performances, but the meaty middle, the most important part, never rises above being filler.

As you could probably guess, there’s a split in their relationship. It’s not a quarrel or infidelity. Their world is torn in two because of an existence-shattering event. We gets hints of it, but even with 30 minutes to go we get little to no detail. That’s why, for me, the film felt so hollow. Share the information with the audience and then craft unique scenes that challenge the way we should process it. Ned Benson, the writer and director, egregiously and mistakenly puts that on hold. Resembling the most strained relationships, the film never lets us in to share the love and embrace. We’re spectators.

Connor’s story is pretty simple. His father (played by the scene stealing Ciaran Hinds) is a successful and tired restaurateur. Determined to pave his own path, Connor runs a profitless bar and grill with his friend and chef Stuart (Bill Hader) straight into the ground. McAvoy is always good and here he’s excellent in spurts. His half is simply too commonplace for the talented actor to enhance the character. As for Eleanor, she’s a complicated handful. Chastain is one of, if not the best leading lady in films today, with a range that’s second to none. Eleanor’s parents are academics, and after getting pregnant young, drops out of college and haults her dissertation to raise the child. Flash forward and she’s back taking classes, seemingly only to be immersed in the classroom atmosphere once again, and befriends Professor Friedman (Viola Davis, who you connect with in such a short amount of time). As Eleanor disappears, she and Connor are lost from their own story.

You can’t tell an account of grief and loss without first giving us something to mourn and lose. Ned Benson’s drama is ultra high-concept and a creative approach in narrative storytelling. Yet, the conceit is never fulfilled. The end result is a disjointed and sloppily stitched together film, obviously unequally taking scenes from each character’s perspective (for what it’s worth, Her is 11 minutes longer.) If you want to see this story, seek out Her…I guarantee it’s the best of the bunch. The Disappearance of Eleanor Rigby: Them dawdles along like a caterpillar, spends most of its time bunked up in a cocoon of ennui, only to spread its wings and wistfully fly away without ever bothering to stop and say hello. Clearly “Them” was never meant to include those watching.