“You gotta get on with your life.”

It’s one thing to plagiarize a film. Even worse is to do it poorly. A wannabe copy of last year’s supremely funny and heartfelt The Trip to Italy, or even that film’s predecessor, this is one of the worst movies I’ve seen in 2014, a completely ill-advised waste of time. Defined by it’s amateurism both onscreen and off, the story washes ashore far past due. Land Ho! is like the ventures of Cape Horn, sailing farther than needed, or is wanted, to meet it’s destination. Abridging this into a short film, aka its own Panama Canal, would have made the journey bearable. Don’t mind the critics lauding this as an endearing or sweet tale of friendship. Just read on and realize that grazing over these few paragraphs is a whole lot better than spending an entire evening with this film. If time is currency, money earned is not always money well spent.

The brutish Mitch (Earl Lynn Nelson) shows up out of the blue to surprise ex brother-in-law Colin (Paul Eeenhoorn) at his home, wherever that may be. They dine, drink, catch up a bit. Then Mitch invites Colin to Iceland for an adventure. We’re never told why that specific locale. We never sense that the trip will mean anything. It’s as aimless as a blind man playing darts. The two have a boring and one-way dynamic from the start, and it just gets worse from thereon out. You can’t make a buddy film if one character is a ventriloquist to the other’s stiff, wooden gaze.

Mitch is a quip artist, the kind of guy you’d meet at a party and wish you had a sock to put in his mouth or a roll of duct tape to cover it. He’s constantly a dirty rotten scoundrel, for some reason proud to talk like a horny adolescent despite being a single and retired doctor towards the end of his run. Meanwhile, Colin is the Teller to Mitch’s Penn Jillette. If he talks it’s about movies or art, but mostly he just scoffs at the landfill of garbage Mitch relentlessly throws up. There is no drama, one scene that is actually funny, and a robotic cadence to the obviously rehearsed dialogue (probably due to the lack of skill directing behind the camera.) These guys aren’t friends. Their stale conversations and montaged dances outside of their Hummer while traversing Iceland add no more effect than a Grayscale filter. 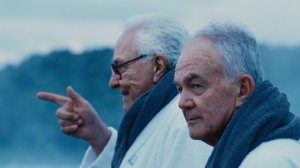 To make things worse, the movie sports one of the most laughable taglines I have ever seen (funnier than the entire movie.) “Come Party With These Guys!” Of Course! We all want to party with old men, one who might as well be wearing a bark collar and another who’s gross enough to flirt with his much younger and once-removed cousin. This is not the road movie many would try to suggest. Nor is it a successful attempt at characters developed through dialogue rather than action, as writers/directors Aaron Katz and Martha Stephens ridiculously try. Classic road movies, and most stories in general, are built around drama. This is an aged and boring version of Sideways interspersed with the attempted conversational genius of 1981’s My Dinner With Andre (the full film is on youtube). Katz and Stephens may very well have talent as filmmakers, but they fail to take advantage of their breathtaking scenery. Instead they premasticate a garbled story and force feed it down our throats, turning their audiences into future Foie Gras dishes. Trust me, just like that inhumane process, this film is ugly by all definitions.