“You need to do something, sweetheart. Things can’t go on like this.”

Foreign films, for whatever reason, seem to be able to achieve some semblance of artistic achievement clearly lacking in American cinema. Who knows why. Maybe it’s the production companies and their willingness to bring raw and honest stories to fruition. Maybe it’s just the result of a different way of life, one filled with a European sense of artistic expression. The Broken Circle Breakdown is just that. It’s very good, but not great, and probably a little too scatter-brained to engage most viewers the entire time. A 2014 Academy Award nominee for Best Foreign Language Film, this is a story entrenched in tragedy, and shows how joy can still be found in spurts through a bluegrass tune.

We start in Ghent Belgium, 2006. Didier (Johan Heldenbergh) is a grizzly bearded man with a soft voice and magical fingers on a banjo. Elise (Veerle Baetens) has golden blonde hair, and her minuscule figure is covered in tattoos, many of which disguise the names of past lovers. Their love is solidified in their shared passion and appreciation for bluegrass music. They wed, have a daughter, build house together. Everything seems normal. That is until their daughter Maybelle is stricken with cancer. And as so often is the case, the victor of the fight is clear from the onset. It’s no spoiler to say that Maybelle dies, as it happens early in the film. The passing of their child is the first chapter in a relationship that will forever be marred by misfortune. This is an odd couple, one you wouldn’t guess would be together, and the way they go about this catastrophe is entirely different. 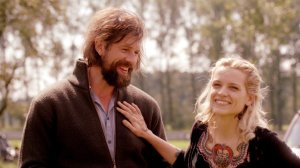 I’m unfamiliar with any of the director’s (Felix Van Groeningen) small filmography, but I will definitely try to see more. The movie is a singular vision and one that should have been nominated for Best Editing during this past awards circuit. The script, adapted from the play written by lead actor Heldenbergh, takes an incredibly layered approach. It lives up to the title in that it’s a circular tale broken into rearranged fragments. We experience this story in a non-linear fashion which raises questions we can only hope will be answered or addressed later. No worry, it’s not a movie about ambiguity. There is no open-ended conclusion that leaves us scratching our heads. In a way, it unfolds like playing the game telephone. Somebody started telling this story long ago, and by the time it has been passed on to us, it’s muddled and hard to articulate. But all that matters is it making sense in the end, which it does, ever so somberly.

There is some masterful acting by the leads in this film. We get to see their loving gazes towards one another in the beginning of their courtship, their appreciation for the other while building a life and a family together, and the longing to connect after a mutually crafted existence is shattered by unspeakable horror. There are great back and forth scenes where we see the actors play off of each other, like displacing the blame of their daughter’s death on the other spouse. But the best acting comes with their movements and the emotions felt through their eyes. Both the good and the bad. And it’s easy for us to tell because their eyes don’t intend to lie to us or hide any of what they feel. They emote wonderfully. The screen takes a brazenly red hue when showing their scenes of joint passion and romantic bliss, while later parts are so blue it’s impossible to misunderstand the moment. It’s visually arresting and informative of the characters’ current ecstasy or plight. 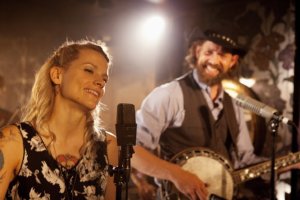 Sometimes the movie drags and feels as long as the nearly two hours that it is. The first half flies by, while the latter gets too overwhelmingly heartfelt and melodramatic. Yet, I can’t see anyone disliking this movie. Sure, it’s saved by disarming music and captivating performances, but it seems to have a deeper meaning. Much of the second half deals with faith, and the dissimilar beliefs Didier and Elise have on the subject. She’s hopeful, he’s a realist. The death of a child would certainly evoke these emotions, and possibly change one’s own convictions. The Broken Circle Breakdown ultimately is about growth, that not everything is a circle, and how sometimes new sorrow can lift you up from the depths of past despair. 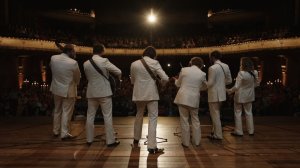 Towards the end of the film, Elise lays with a dwindling Maybelle as the little girl asks her father about the stars. He reminds her that some of the stars in the sky died long, long ago. And that it takes so long for their light to reach us that they still appear to be there flickering in the black. As he tells that to his daughter, and Elise strokes her bald head, you whip out a tissue knowing that Maybelle, and they as well, might just end up being like one of those bright lights in the night sky. Burnt up and gone, but still shining over those who caught a glimpse of their radiating glow.