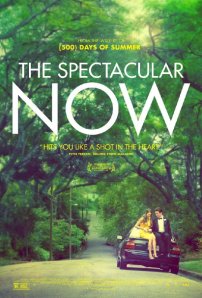 Unlike most other movies of its kind, The Spectacular Now finds a way for us to remember the high school experience without cheapening its authenticity; it’s more sentimental in its depiction of those moments than it is nostalgic. The time period and the setting are not directly specified because the people we come to meet are what matter most, and these are not just characters being played up on the big screen. We have known them, maybe even been them. Relationships are shaped and broken, hearts entwined and unraveled, and decisions either made or abandoned. We care for these people by the time the credits roll. That’s a rare accomplishment for movies today. 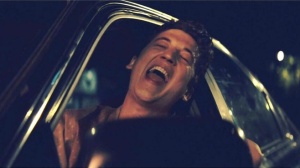 Sutter Keely is a high school senior on the brink of graduation if he can pass his Geometry class. He parties, he drinks, and he makes sure other people enjoy themselves. He worships his absent Dad and he blames his Mom for their breakup. After school he works in a local men’s clothing store. The owner is Dan (a sublime Bob Odenkirk), a man who just wants to help a kid unwilling to help himself. Sutter’s life is good for the time being. He cruises the streets with his pot smoking best friend Ricky, looking for a chance to get his pal some “sweeeeeet action.” Sutter’s girlfriend Cassidy (Brie Larson) often gets tired of his irresponsibility but is slowly reeled back in by his boundless charm. This is the guy you want to be around. Whether you like him or not, he makes you feel better about yourself. The film is directed by James Ponsoldt and adapted from the novel written by Tim Tharp, which was up for the National Book Award. After seeing the first trailer, I decided to read the book before going into the movie. There are a few tweaks to the story, but it remains the same at its core, with the ending being the exception. The movie’s last shot leaves you warm and hopeful, like a pull from Sutter’s closely clutched flask, unlike the brutal last image in the novel.

Sutter, played by the magnetic Miles Teller, has everyman looks and a constant buzz going. He’ll sip a beer while writing his college admissions essay. Pour a little whiskey into his big gulp while working. Even go to the liquor store while on his school lunch break. The thing is, this is not a film about drinking. It’s about a young man who drinks, and there is a big difference between the two. Buoyed by an excellent script from the writers of (500) Days of Summer, we don’t even realize his steady sipping until we’re far into the movie. In fact, the word alcoholic is not said once. We don’t have to define his character. Drinking is just something he does, albeit far too much. 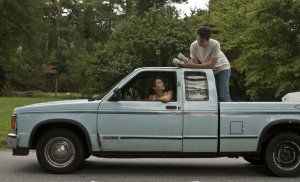 That’s where Aimee Finecky (Shailene Woodley) comes in to play. Their meet-cute – the first encounter between a future romantic couple – doesn’t exactly match that description. He is passed out on a stranger’s lawn after a long night of partying; she’s up early doing her mom’s paper route, minus her mother as usual. Woodley was a revelation in The Descendants and here she proves it was no fluke. She looks like an 18-year-old. Naturally pretty, somewhat lanky. She says “that’s great” or “amazing” so many times that it’s easy to lose count. But you hardly notice because that’s how teenagers talk. Her eyes glow when Sutter offers to help her finish the route if she helps him find his car. They are two very different people, but their family lives, or lack thereof, tie them together. They’re alone. Like most young adults, when that first person comes along who really cares about you, and eventually loves you, it becomes something you cling to. 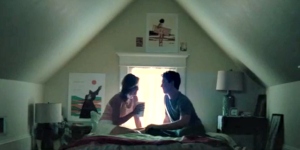 The first and second acts of the movie play out a lot how you would imagine. Sutter tries to get back with his now ex-girlfriend Cassidy. She’s moved on to someone who presents a possible future. He weighs his options. Shots like the one above, beautifully framed and composed, show that Sutter is capable of finding the light. Then look at his gaze, where his eyes are pointed. He’s looking at the wrong girl, as well as the cup full of soda and whiskey. It’s a shame, how flawed his character is. How easily he settles for comfort in all of the wrong places. 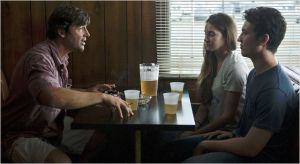 Sutter’s mother (Jennifer Jason Leigh), a nurse who is always working, doesn’t want to tell him where his father is. Then he asks his older sister Holly (Mary Elizabeth Winstead), who reluctantly agrees, and cries after doing so. Sutter obviously shouldn’t meet this man. But like most young people, it is a lesson that he needs to experience on his own. Their encounter produces an incredibly heartbreaking scene (the most brutal part was apparently improvised by Teller and Woodley…you’ll know what it is). His dad, played by Kyle Chandler, does a reversal on his Coach Taylor of Friday Night Lights that he is most known for. He is selfish and blunt when he says to Sutter, “I’ll tell you something. I don’t live in the past, I live in the now, because that’s what it’s all about.” It’s a strange and terrifying thing, to idealize and worship somebody you don’t really know, and more often than not have them fail to meet the standards. Teller’s eyes show the pain that Sutter feels. Like him, we feel the punch to the gut. His hope is swallowed up as fast as his father can down a beer. 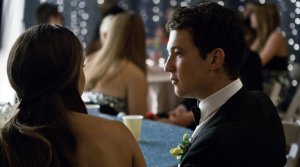 I left the theater a little confused. I loved the movie but I wasn’t sure why. So I saw it again two days later. And again two days after that. And probably would have gone once more had it not been pulled from the theater’s rotation. Then a little lightning bolt struck me. “Coming of Age”, the genre most people would describe the movie as, is not a real thing. What does it even mean? Do we suddenly finish growing? That can’t be it. Life doesn’t stop for Sutter, Aimee, or any of the supporting characters. Not even for us. It simply changes. This little independent film, not widely seen, is my favorite to come from 2013. It makes you laugh and vicariously take part in high school again. Then it makes you think about the decisions you made, and how maybe you might have made a few mistakes. And then it makes you love, and hints at the often inevitable defeat of that first serious relationship. There need to be more films like this, if not only for teenagers to watch and think to themselves, “See! This is how I feel.” That’s the beauty and the magic of The Spectacular Now.

“It’s fine to just live in the now, but the best part about now is there’s another one tomorrow. And I’m gonna start making them count.”